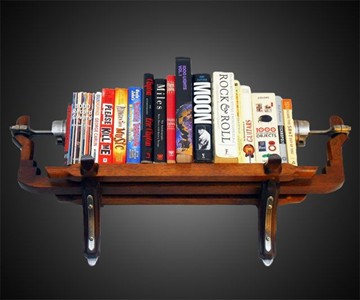 I've always thought Suzuki motorcycle pistons would make a great bookshelf, and here's proof in the form of a Suzuki motorcycle piston bookshelf. Matt Johnson handmakes each one with Spanish cedar and aluminum and needs 2 weeks lead time to do it, probably because he's got to find, stalk, and jack the pistons off a Suzuki every time he gets an order. The bookshelf mounts on screws and appears to do a good job of holding books. I think it would be cool if the pistons were spring-loaded though so they could expand and contract according to the number of books present and that way one or two or all of them wouldn't fall off the shelf at 3 a.m., causing you to bolt upright ready to fight for kingdom come, only to realize a minute later it was just the Oxford English Dictionary, not the apocalypse, but by that point your brain has already started churning and analyzing and thinking about stuff so there goes the rest of that night's sleep.

I mean, are Stormtroopers gonna be any better as bookends than they are as sharp shooters? Seems like you'd rather have someone with The Force on their side, like Yoda or Luke, or at least some legit literal force, like...