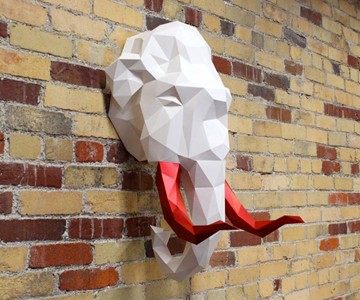 Rather than designer animal kills from sub-Saharan Africa, Tristan Sopp is into killer animal designs from his own head. The 10 exotic head trophies Sopp has conceived and developed for his Resident Design Co. shop are all made of paper. But don't worry, when you mount the likes of Tim the Mammoth and Red the Dragon above your fireplace, you can still beam with pride over your accomplishment because Sopp sells all of his paper animal heads as kits you gotta put together yourself.

And some of them may be way more difficult than taking down a fire-breather in the wild.

All Resident papercraft kits arrive in pieces that are scored along their fold lines, and include a small bottle of glue, along with complete instructions for assembly. Tim the Mammoth, pictured above, is one of Resident's more difficult trophies to build. With 75 pieces in the set, expect to spend between 7-1/2 and 12 hours perfecting his geometric trunk and tusks. Once complete, you'll have a 15" x 31" x 18" of mammoth to show off to your less able-fingered friends.

On the other end of the Resident papercraft spectrum, Ken the Walrus is a 41-piece kit that Sopp calls "one of the more manageable animals in the aquarium." He should take between 4 and 7 hours to complete.

The practicality of slaying a dragon in 100% leather armor is questionable at best, but one thing's for sure: all the fair maidens who haven't seen this much cowhide since Kiss performed at the dairy farm are gonna dig...

NLO Moto, recently of Predator 2 and Dredator 3 motorcycle helmet fame, has popped out a third mythical beast to add to its alien headwear menagerie. While the Orc Dragon deviates from using a Schwarzenegger nemesis as...

Sold Out The Fire Pit Gallery »

Melissa Crisp smiths some wicked fire pits. You've seen her stunning (yet slightly twisted) Forest Fire Pit burning through these parts before. And here we have an equally equal parts cool and disturbing example of her...