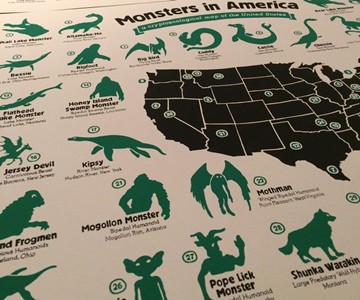 $25
from Hog Island Press »
Check It Out

Monsters in America: A Cryptozoological Map of the United States provides descriptions and locations of origin for beasts ranging from the Jersey Devil, Bigfoot, Mothman, and Chupacabra to Shunka Warakin, Caddy, the Honey Island Swamp Monster and Allamaha-Ha. Whoa, I just learned, like, 8 new words in a single sentence. Cryptids, for those who don't watch late-night programming on F/X and the Discovery Channel, are animals whose existence has not been proven, or that have been long considered extinct. Cryptozoologists study these creatures. Note: some people use the terms "cryptozoologist" and "wack job" interchangeably.

As informative as it is kitschy, Monsters in America gives a telling glimpse into our country's history, legends, and mythology. For example, I would have thought that at least 50% of the map's 32 cryptids would hail from Florida and Texas, but those states contain just one and two respectively (Skunk Apes; Chupacabra and Big Bird.) On the other hand, I guess it's not all that surprising that the highest concentration of red-blooded American monsters falls along the Appalachian Mountains. My Uncle Marvin from West Virginia could himself pass for the Lizard Man of Scape Ore Swamp.

Each Cryptozoological Map is screen printed on 80lb 25" x 19" archival paper. The original Monsters drawing was inked and screened by hand.

Worry Monster - Gobbles Up Your Troubles

I've seen Worry Monster stuffed animals, plush toys with zippered mouths and belly pouches made to hold your fears and concerns. But with their technicolor fur and cartoonish looks, those Worry Monsters are obviously...

Memories of the most beautiful, challenging, momentous trail you've ever traveled become a custom, 3D work of art, courtesy of Topo Trail Maps. Out of his studio in Oregon, Trevor Crosta handmakes every Topo Trail Map...