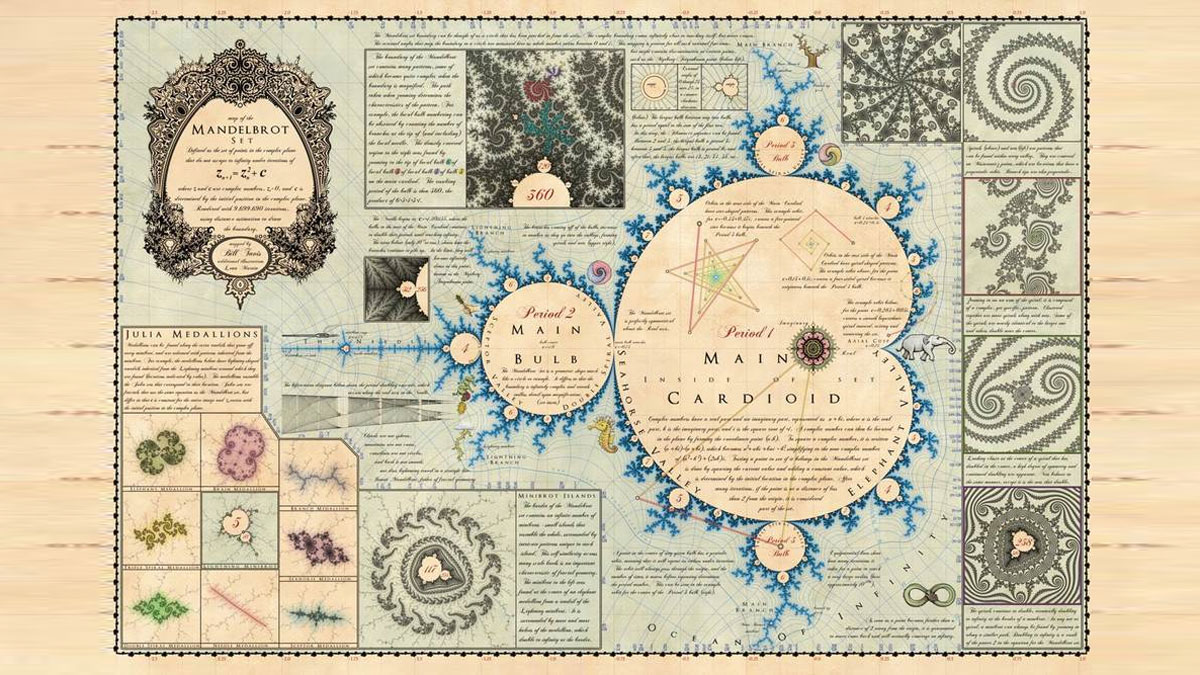 I'm about to tell you about the Mandelmap, which means my brain is about to get really sore. You might look at the poster and think it looks cool. Artsy layout, vintage finish, and lots of "stuff" spanning its surface to inspect further. The "stuff," though, that's the tricky part. That's the Mandelbrot set that gives the Mandelmap its name.

The Mandelbrot set itself takes its name from Benoit Mandelbrot, a man many consider to be the father of fractal geometry. His set begins as a mathematical equation--some Zs, some Ns, some + signs and a C. Using this equation and its iterations, you'll be able to compute yourself some fractals. Rough geometric figures that seem too infinitely complex to boil down to an equation, but that, thanks to the Mandelbrot set, somehow do. The results, the visible fractals, can be stunning. Or chaotic. Or look just like the seahorse you saw when you were snorkeling a few weeks ago.

Artist and researcher Bill Tavis created the Mandelmap as a tribute to his love of fractals. It took him over a year to perfect it, both in accuracy and aesthetic appeal, using software he coded himself, and shapes from the Mandelbrot set. Following a successfully funded, and successfully delivered crowdfunding campaign, Tavis is now selling his Mandelmaps directly to anyone who digs "the set of all points in the complex plane that remain bounded under iteration of the equation" as much as he does. Choose from a 36" x 24" or 54" x 36" map printed with offset lithography at high resolution, and treated with a scuff-resistant coating.

The poster seeks to help make sense of the Mandelbrot set with a map of its more common features. Tavis gives an overview and explains some of the concepts in text, and then accompanies them with drawings, including:

It's 2.2 pounds--or what the rest of the world calls 1 kilogram--of tactile stimulation and scientific wonderment. While all sand can technically enjoy kinetic activities, Kinetic Sand claims the additional bragging rights...