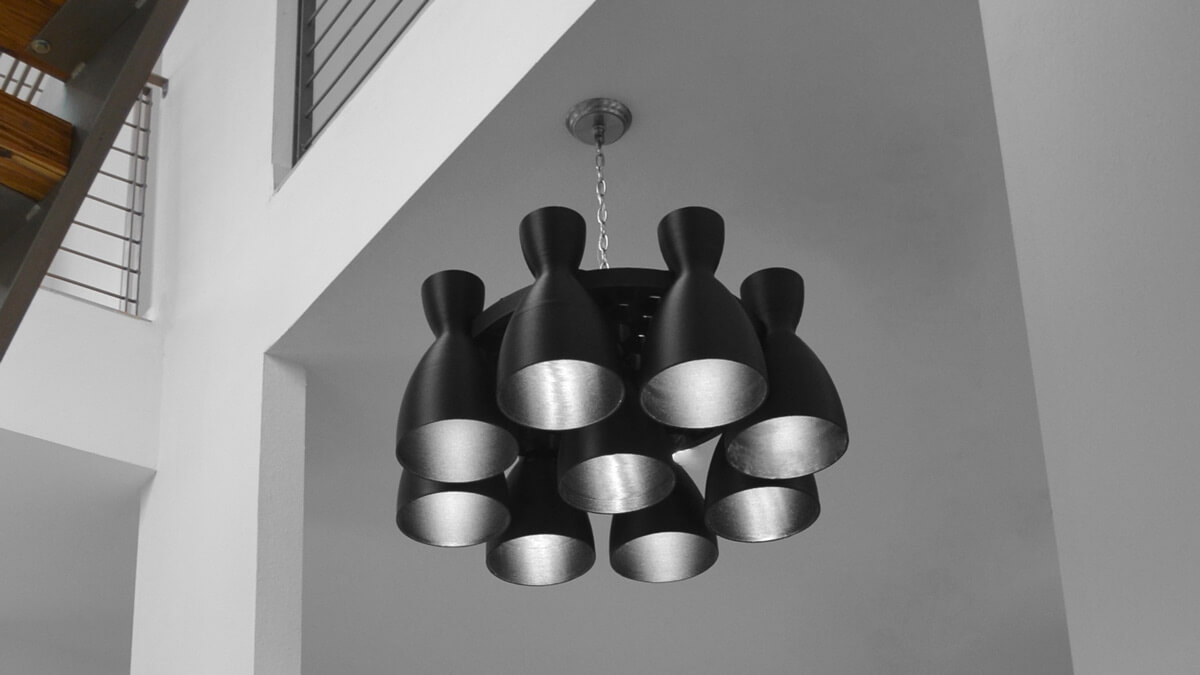 How did a Falcon 9 Rocket Chandelier, uh, come to light? According to designer Andrew McCalip, "When you own a fleet of giant composite extrusion 3D printers and love space like we do, stuff like this happens."

The "stuff" McCalip speaks of is a timely nod to SpaceX, an overhead showpiece made with your choice of 2 space-age materials that blasts the light of 9 BR30 LED bulbs. Falcon 9, version chandelier, can be printed in polycarbonate, with glass fiber reinforcement and - I have no clue what any of the next things I'm about to write mean - a flexural yield of 210MPa with a Youngs Modulus of 17GPa. But I do know what this means: the material makes a nifty Gong! sound when rapped.

You can also command your Falcon 9 chandelier be robot-forged in the even more geek-gasmic Polyphenylene sulfide (PPS), a material McCalip and crew print combined with 50% carbon fiber by weight. He says it's the highest strength 3D printer material developed to this point. And does it Gong! too? Sort of. McCalip says that, though plastic, the PPS-carbon fiber sounds like metal when struck, and is super trippy to hear.

I guess my recommendation for either version of the Falcon 9 Rocket Chandelier would be to hang it low, within reach of your gong hammer, so you don't have to climb a ladder like McCalip in the photo gallery above to announce it's dinnertime or get everyone to quiet down for your toast / the next SpaceX launch.

3...2...1...blast off dry eyes, parched sinuses, flaking skin, and bloody noses! The HUM! is a home humidifier shaped like a rocket, and designed to push its vapor out the bottom rather than the top, creating the superb...

Why give tens of millions of dollars to the Baby Beezus or Branson, MO to go on a rocket and spend 2 minutes in space when you can spend $30 on a Cork Rocket Desk Organizer and have somewhere to store your pens and Sharpies...

The best part of the Jetpack Pick Me Up, an inflatable jetpack costume from Morph, is that it says "Acme Jetpack" on the side. Shout out to Looney Tunes!...