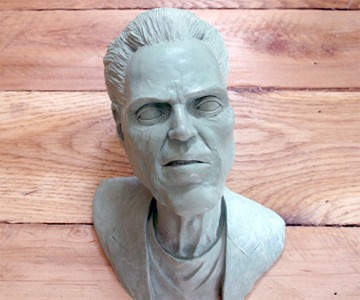 I can't think of a better way to greet my guests, guard my house, and make myself feel perpetually on the brink of getting the shit kicked out of me than the mounted head of Christopher Walken. The most disturbing former Broadway actor ever once said, "I like to go to work, and also, I don't have any kids. I don't have any hobbies. I don't like to travel. So going to work is kind of it." So I hope he enjoys his new job as a decapitated head living above my fireplace. At least I know there aren't any kids (potential bastards notwithstanding) out there who will miss him. Hollywood and Saturday Night Live will sure miss him though. They've probably made more money off of his cowbell line than every word that hack Tom Hanks has ever muttered during one of his hosting gigs.

In honor of his turn at taxidermy, here are a few of Walken's best movie quotes:

Walken taxidermy is hand-sculpted by Rocco Tartamella in Casteline and measures 9-1/2" long x 6-1/2" wide. He arrives in an off-white casting, and presumably can be painted in rainbow colors to match his sunny disposition.

Tear Stick to Make Yourself Cry

When applied to the rims of the eyelids, the Kryolan Tear Stick generates big fat ones for the likes of actors, drama queens, and people who believe crying will get them out of speeding tickets, or into sold out shows...

The Skull Bowl is part of Buster + Punch's Travis Barker Collaboration, a collection that also includes candlesticks, cabinet knobs, door stops, drum keys, and pendants. All skulls. All day long. All too available in...

Handbook for the Recently Deceased

This Handbook for the Recently Deceased contains 220 blank pages. I don't know if that's better or worse than Adam and Barbara Maitland's gibberish-filled version. Perhaps better, as at least buyers can fill this one...

According to the Handbook for the Recently Deceased, the Beetlejuice Terrarium is an accurately-depicted scale model of the Maitland-Deetz estate, replete with fence posts, dirt driveway, the foreboding, Burton-esque...