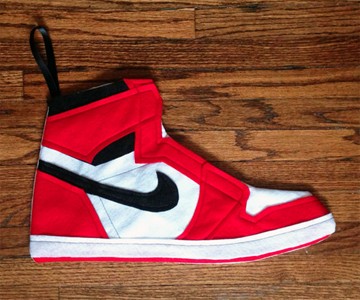 Swoosh! The only problem with hanging a 2 AM Project Air 1 stocking for Christmas is that it's gonna dunk on Santa's ass every. time. Over his head, under his beard, around his fat jelly belly...nothin' but net. This nature of ultimate sneaker stocking may even turn the jolly Claus grumpy, prompting his reactionary departure from your living room with the same number of gifts he came in with. ... Good thing your cheetah speed and mad ball handling skills will enable you to steal the whole sack before Santy makes it even 3 steps back up the other end of the chimney.

June 20, 1993. Game 6 of the NBA Finals. Bulls at Suns. Jordan v. Barkley. MJ didn't sink the title-winning 3 that day, but he was the sole reason Chicago was able to do what no team had in 30 years. I clearly remember writing in my journal...er, I mean, turning to my friend Cornelius...after Paxson's shot and saying, "Bulls three-peat, bitches."

Yeah, I know. I'm skeptical of that application of the term "bitches" having entered it into the vernacular as far back as 1993 too. Maybe it was, "Bulls three-peat, beeotch."

Coming June 2022 to a Swoosh store near you: Nike ISPA Links. Fly modular sneakers with 3 interlocking pieces that connect without glue. And when I say "fly," I don't mean fly-ass. I mean fly-eye. As in, what the soles...

Sneaker in the front, party in the back! The Mullet Shoe is a high-top with a striking, and silky smooth, set of light brown locks cascading down the back of its upper. It's a mullet...for a shoe...ready to swish all...