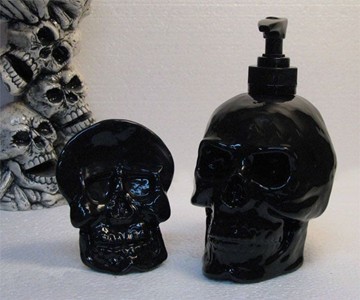 The soap dispenser is in the shape of a human skull so that when pumping it you can imagine the slippery translucent matter oozing from its spout is brain juice. Coincidentally, this is an actual malady. Brain juice pouring out of the skull, that is. It's called spontaneous cerebrospinal fluid leak syndrome, or SCSFLS, and it occurs when the dura--the outermost protective tissue surrounding the brain and spinal cord--is inexplicably punctured. Most people don't even realize they have anything wrong with them until the insane headaches hit, particularly those whose cerebrospinal fluid is leaking out of their nose because it looks just like clear snot and feels just like, you know, you have a runny nose. Anyway, the next time you wash your hands, no matter what type of soap dispenser you're using, feel free to ponder SCSFLS.

Etsy vendor and kiln-keeper Jacque Honeycutt's skull soap dispenser can also shoot other medium-thick gelatinous substances, such as lotion, hand sanitizer, ketchup, and mayonnaise. Mmm, so now your vivid imagery choices are brain juice, brain blood, or brain puss. The skull is made of ceramic earthenware and coated in a non-toxic jet black gloss glaze on the outside, as well as a clear glaze on the inside to improve its seal, lengthen its serviceable life, and preclude any potential dura punctures. With the pump attached, the dispenser measures 6" tall, as well as 4" in diameter at its widest point.

JoyFous is a retractable rolling shower screen made for 3-wall bathtubs. It's mold-resistant, watertight, inexpensive, and here to absolutely ruin showering. Doesn't JoyFous know half the fun of climbing in a tub and...