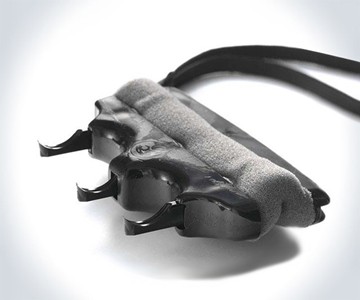 TigerLady is a discreet self-defense tool that looks like a hand exerciser mixed with giant, jungle-roaming-feline claws. Like a cat's, the TigerLady's spiky, high-impact plastic claws retract when all is well, and then, with the clench of a fist, shoot out between their wearer's fingers at the first rustle of trouble. The tool has a wrist strap to prevent loss, and ergonomic grooves on its grip for comfortable carry on the trek back to the parking lot, walk home from dinner, or 10K run through the park. It weighs less than 2 ounces.

The TigerLady's claws also have channels on their underside intended to capture an assailant's DNA during use.