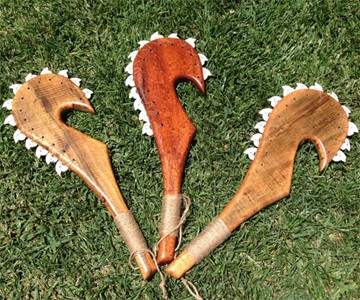 Land shark! Or at least the scariest part of the shark now available to tear into human flesh on land. Dane Kealoha's shark tooth weapons style themselves after traditional blades and blunt implements with walloping power, but where one would normally find a sharpened edge or fashioned point of impact, Kealoha has installed a bright white fringe of a cartilaginous fish's shredders.

For example, the Hawaiian Koa Machete, which looks like what would happen if you bred a shark's mouth with a marlin's bill, is made from solid Koa wood, and follows the general shape of a jungle hacker, but along its outer rim are 28 tiger shark teeth affixed with adhesive and twine. The knife itself extends 27" from end to tip, and is 3" wide.

Kealoha's Hawaiian Paddle Weapon recruits the same Koa wood, and same tiger shark incisors, but while the machete's individual teeth measure 5/8", the paddle incorporates an XL variety, with each spanning 1-1/8". Paddles are 13" long and 5" wide, and have two finish options

The featured photo depicts a trio of Hawaiian Koa Fish Hook Weapons, which are tied with the slash-and-bash Hawaiian Koa Knuckle Duster for my favorite of Kealohoa's handcrafted pieces. Obviously popping some hoodlum thief or the friend who lost the bet in the face with a fist protected by a grip of shark's teeth would be one of the most memorable moments of my life. But that fish hook weapon looks like it could F someone up and crack open a bottle of beer for me afterwards so, again, it's a tie.

And you thought your socks went missing before. Good luck getting any of them back from the Shark Bin. I heard he also likes dirty underwear, and I gotta think Crotchless Yoga Pants are up there too...

Sweet, Mode, I've been looking for a wireless electric toothbrush to go with my black marbled bathroom wallpaper and black toilet. Really...

Am I more or less likely to floss with the Philips Sonicare Cordless Power Flosser than I am with regular dental floss? Hmmm, well, as long as I use Philips' Sonicare Toothbrush companion more than once a month, I'd say...