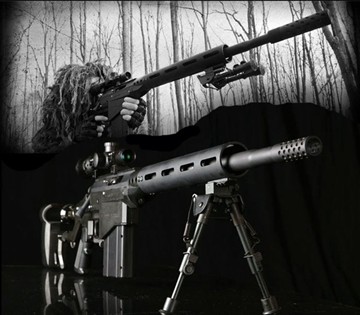 $1,399
from Carmatech Engineering »
Check It Out

Excuse me, sirs of Carmatech Engineering, but are you sure this so-called paintball sniper rifle shoots only balls of paint, and not balls of, like, lead? Oh, is that so? Yeah, OK, that makes sense. The SAR12 Sniper shoots paint-based ammo, but its uniquely-designed 12-round magazines and ability to switch into semi-auto mode make owning and firing one suitable only for men with lead balls. Well. Tough break for my friend Cornelius. His balls are made of marshmallow and Grands Biscuit dough.

Sniper rifles are made in the USA and come with a 2-year warranty. The pictured semi-auto engine and scope are sold separately.

Thanks, Randy G., for the Dude Product Tip.