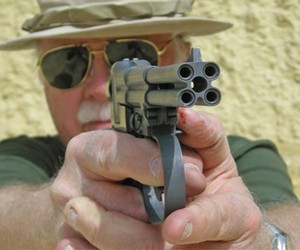 As we prepare to honor the USA with a day of drinking beer, eating potato salad, dinking around with bottle rockets, and setting fire to the sky, the Four-Barrel Underwater Dart Gun would like to remind us we should also raise a glass to the end of the Cold War. The 4.5mm SPP-1M, a marine pistol for combat frogmen, is one of who knows how many pieces of BSC weaponry the Russians created over 30 years ago, and that Americans even with classified clearance didn't find out about until manufacturer Tsniitochmash unveiled it publicly in 1993. Today, it is even available for public purchase, though precise means of acquisition remain unclear. I presume many dollars, many liters of vodka, and a few dozen piroshki are required.

Under water, the SPP-1M has a bullseye range of:

I think that's pretty James Bond-approved, right? Plus, at its greatest range of underwater fire, the pistol can penetrate a target wearing a polyurethane-foam-padded diving suit, and protected by organic glass up to 5mm thick. And check out the photo of its expired ammo when fired through air instead of water. A hit is still lethal, but the darts destabilize quickly post-fire, and trajectory is extremely erratic. You might hit the zombie you're aiming for...or you might hit Bill Murray. Also, while military use of the SPP-1M reigns supreme, Tsniitochmash would also like to point out that the weapon can be used by civilians to protect themselves from "marine predators". So surfers and kayakers take note: the next time you're out communing with nature in shark-infested waters, don't forget to strap a quadra-barreled dart gun to your chest!