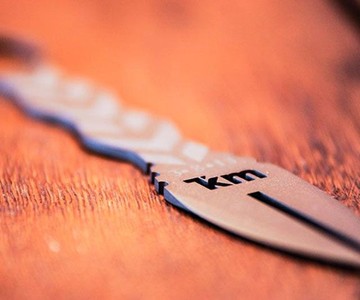 Five seconds into a look through Triangle Krav Maga's Website and Facebook photo stream and two things become abundantly clear: these cats do not F around; and I would like an application to become one of them. After all, if versed in the kind of situational, real-life, scare the ever-loving shalom out of me counter-attack training TKM appears to offer, I'm pretty sure I could take down anything from an incensed warthog to zombified Jon Jones to Kirstie Alley making a play for the last 5 pieces of double chocolate caramel Oreo cheesecake at the Old Country Buffet.

Benthic knives come with a concealed carry Kydex sheath, plus a "Butter Knife" for dull training. Though TKM points out even it can be used as an impact weapon. All Benthic products are made in and near the Triangle region of North Carolina, where Triangle Krav Maga resides and breeds masters of hand-to-hand fighting.

Thanks to Michael M. for the Dude Product Tip.

Huh. Not sure how Buddha would feel about people co-opting his peaceful name and beads of spiritual exploration and meditation to make a necklace for whacking an attacker upside the head. But I can kind of see where Phoenix...

Self defense or self-inflicted injury? Swingin' 'round this full steel bracelet like a chain whip without really knowing how to swing 'round a chain whip, it could really go either way...