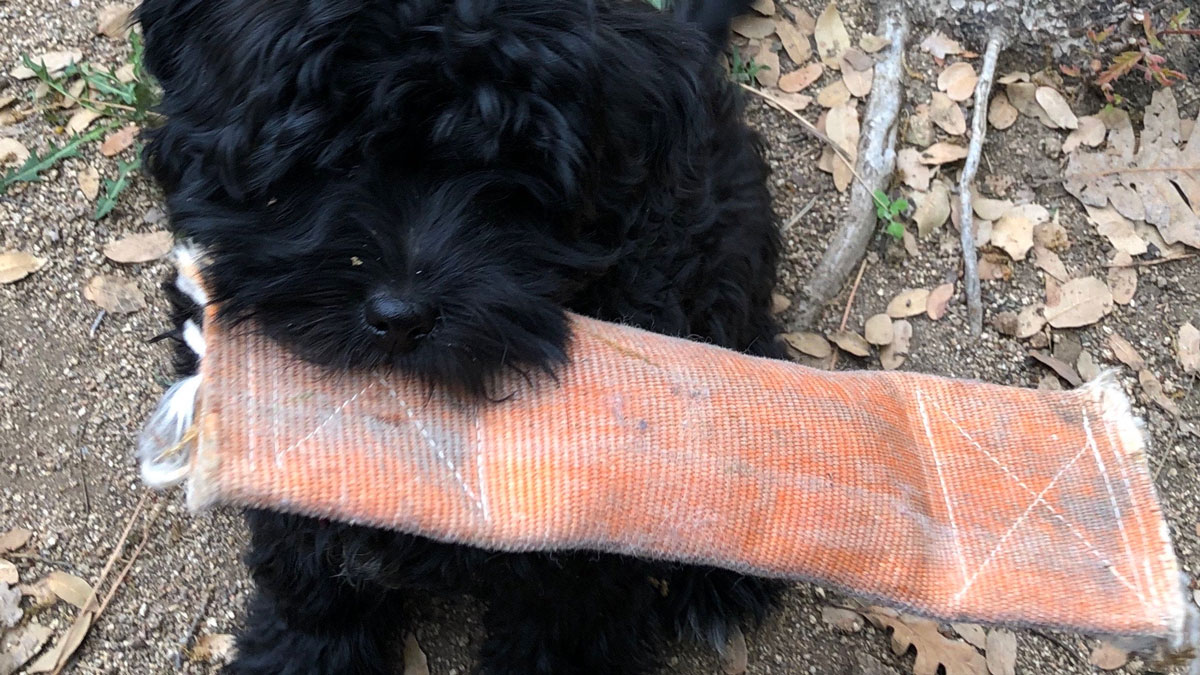 On this 18th anniversary of 9/11, we remember the brave and indefatigable men and women who fought to save lives during and after the attacks. The passengers of United flights 93 and 175, and American flights 11 and 77. The civilians in the World Trade Center and the military personnel in the Pentagon. The first responders who died charging into the rubble of the felled Twin Towers. The surviving firefighters, police officers, and civilians who are still dealing with the traumatic physical and mental repercussions of the events today.

Eric Rotter is an active firefighter in Tucson, AZ. In his free time he runs No Live Fire, an Etsy shop featuring decommissioned fire hose and turnouts Rotter upcycles into sewn items, such as tote bags, wallets, coasters, and the ultra durable dog toys you see here.

Fire hose and firefighting gear is obviously made to withstand hard, heavy, hot, and high pressure use. They may also be the thing that finally withstands Chewie's jaws of steel and Rascal's ability to shake and pull the life out of toys that were never alive to begin with.

As a bonus, with No Live Fire fire hose dog toys, you don't have to worry about buying an adorable porcupine or ducky for your pup, and having him ruin it with slobber, dirt, and bits of treat particulates in the first 5 minutes. These hose sections look like they've been around the block a few (hundred) times upon arrival.

That's not to say they're dirty or harmful to your pets. All hose and turnout gear is washed a minimum of 3 times before repurposing. The fire hose dog toys are made from various sizes and colors of material, and no two are alike.

Like getting a second dog, or dropping in for some remote cooing and play on a Petcube, the TREATOI automatic treat ball dispenser is not going to make your pup look less forlorn when you leave the house, or miss you...

The Bristly is a toothbrush for your dog disguised as a chew toy. A super durable rubber chew toy with different textures and an infused meat flavor to make teeth cleaning time something Doggo looks forward to, rather...

For me, playing with dogs is like playing with kids: I'm good for about 7 minutes before I need a nap. Particularly when they have boundless energy for tugging or saddling you up like a horse and riding around on your...

You & Your Pet Custom Portrait

It takes no stretch of the imagination these days to believe someone created an easy way to make custom portraits of you and your pet. The technology is there. The availability of Photoshop is there. And, for better or...

Bow-Wow, Squeak, Squawk, Meow. I know. I forgot Ssssss, Ribbit, and Cocka-doodle-doo in my noisy intro to pet gifts for 2021. But that's not because I don't care for snakes, frogs, and roosters, just because I happened...