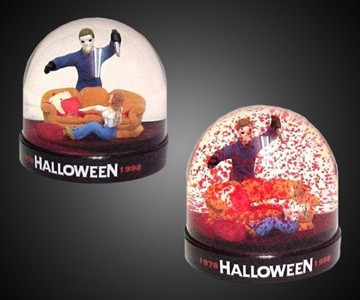 Here's a blast from Halloween past. And not just OG, circa 1978 Michael Meyers, OG 2.0, circa 1998 Michael Meyers too. Remember when they released the Halloween H20 remake to celebrate the series' 20th anniversary? And Jamie Lee Curtis was in it as the sister who can't shake the nightmares of her past life, but now she is a mom and has a son to protect? The son was Josh Hartnett and also Michelle Williams/Jen from Dawson's Creek and Joseph Gordon Levitt/Tommy from 3rd Rock were in it. And LL Cool J as high school security guard Ronny. In retrospect, a real Hollywood powerhouse of a cast.

Which I'm sure is why these collectible snow globes depicting Michael Meyers stabbing a lady and creating bloody "snow" during shaking are flying off the shelves. No joke. Get one before they disappear, and in a few years you'll probably be able to auction them at Christie's for 6 figures. Or you'll be dead. I suppose another reason they're so difficult to acquire is that Michael Meyers has been hunting down all snow globe buyers and reclaiming them slasher-style.

Amelie meets Friday the 13th! What a precious and heartwarming way to die!...

I've been walking by a 10' Animated Beetlejuice Sandworm every day for the last 2 weeks, courtesy of the best neighbor ever who installed one in his front yard, alongside this 6' inflatable black cat with rotating head...