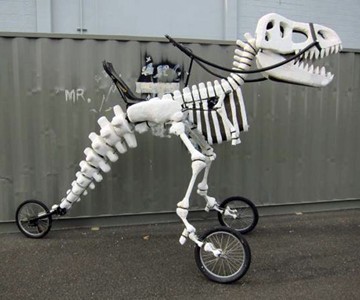 Sold Out from Craigslist »
Check It Out

Of course, of course Portlandia is the Craig's List source for a giant rideable T-Rex bike. I can smell Burning Man 2014 and self-entitled cries of "Share the road!" bellowing through major downtown arterials all over this thing. Case in point:

In all fairness, "Sue" took many months to craft from a pile of stuff to the 12' long, 8.5' tall piece of work you see before you. The bike it's mounted to is actually a recumbent tricycle with a 9-speed wide-range drivetrain, comfortable enough for cruising at around 7mph, but a little unwieldy to maneuver. The seat sits 5' off the ground.

Once mounted, the rideable T-Rex further regales onlookers (i.e., inspires joy and wonder in the faces of children) with its marionette head that turns side-to-side and opens/closes its jaw. Arms are also independently moveable.

Yeah, like T-Rex is gonna let your undulating designs in the sands of your Dinosaur Zen Garden stay put for more than 30 seconds before trampling them. If not out of spite for all your jabs about how he can't, well, jab...or...