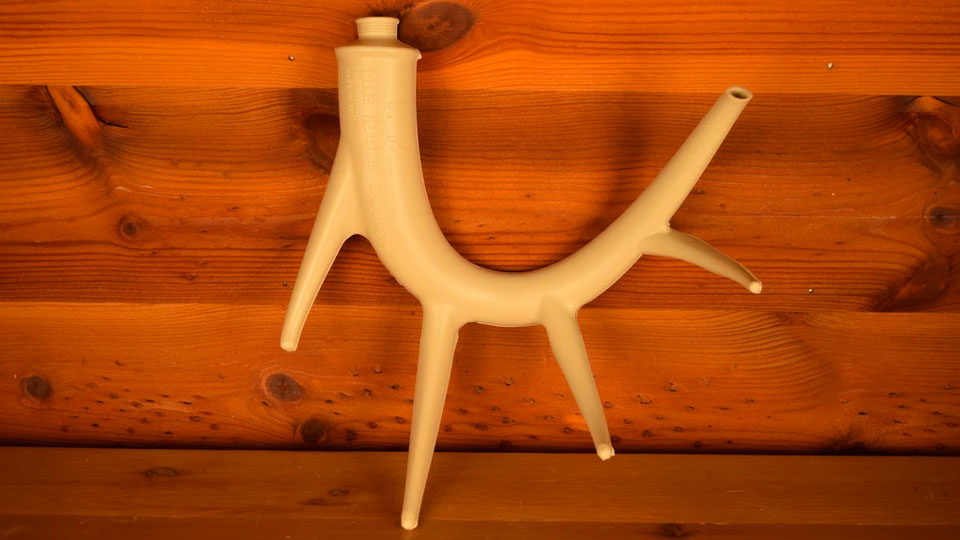 Nah, a slip of the tongue isn't the story behind the creation of the Deer Bong, a 5-point antler replica designed to hold over 16 ounces of brew for the chuggin'. Actually, it's a little better than that: Deer Bongs creators were at a cousin's wedding whose table decorations included big plastic antlers (my kind of wedding!) Antlers, to be specific, with a hole in them. How many drinks did it take to repurpose the centerpieces?

My guess is not even one.

The Deer Bong in its current iteration has come a long way from wedding decor. For one, it has 2 holes in to facilitate the beer pouring and bonging - one's your entry hole, the other your vent. It is also large enough to hold a full bottle / can of beer, and then some. The double punctures also make it possible to drink out of either end of the Deer Bong, and dudes who prefer sipping their beers like proper ladies might also use one like they would a Das Horn or other viking horn-style drinking chalice.

As we head into fall, college partying, and tailgate season, sportsmen of the drinking world can hunt down Deer Bongs singly, or in packs of up to 12. Keep them on hand for winter too, when you'll be able to tie a red ribbon 'round the antlers and turn your Deer Bong into a Reindeer Bong for Christmas.

Taylor Simpson accidentally plowed into a deer with his Knight XV while barreling through Poughkeepsie several months ago and felt so bad about it he swore off driving altogether and converted the slain buck's antlers...

This rack is so nice it will give you solid wood. German home goods store Buchholz Berlin uses real branches, each obviously unique unto itself, to form and finish the Masserast series of kitchen knife racks. Each branch's...

Someone should hire Self-Regenerative Wax Lamp and Antler Chair creator, Merve Kahraman, to design the next Olympics Opening Ceremonies or, like, my living room. Her brain is a giant KFC bucket of ideas. All of them at...

It's a toss up which I like more: killing bucks or killing the lights. Both carry potentially high returns. If you know what I mean. So thanks very much to Pixil 3D for creating an antler switchplate that will enable...

Antler Artisans uses real white-tailed deer antlers - shed antlers only, so no Bambis are harmed - to create a range of household goods. Their beer tap handles for kegerators, keezers, and bar taps are the most standout...

Nothing says you mean business in a fight (or life) like a set of deer antlers fashioned into brass knuckles gripped loosely in an open hand. I think just wearing them is enough to deliver a firm message. What that message...

Unlike the Grizzly Robotic Utility Vehicle, this nugget of LEGO taxidermy would be way cooler if it were bigger. When I first saw it I thought it was a life-size LEGO deer head and I was like, "Yahtzee! Cornelius is gonna...