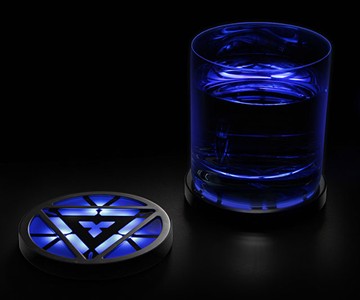 I hope the electromagnetic fields projected by these Iron Man 3 glowing Arc Reactor coasters will keep my drinks safe this holiday season from particulates of snot and saliva ejected by fellow partygoers whose mothers never taught them to cover their mouths, as well as those who cannot say it without spraying it.

Further, I pray that placing my glass atop one of the fusion-powered coasters will exponentially increase its contents' strength. Meaning I can pour a pint of PBR, but drink a pint of Brewmeister's Snake Venom. Or fill a mug with hot milk, but down a mug o' double muscled Belgian blue bull. Imagine the money I'll save! Imagine the blackout, 911 levels of alcohol...and protein!...I'll consume!

Yes, those are my greatest hopes and prayers. Even though I know the Iron Man Arc Reactor coaster set doubtfully does much more than protect sensitive surfaces from spills and condensation rings whilst blazing an icy and mesmerizing blue. It's cool though. The coasters still look nice and I have many other methods for averting germs and getting sloppy drunk in public.

Palladium-free Arc Reactor coasters come in sets of 4, and each contains battery-operated LEDs controlled by an on/off switch on its underside. They are not pressure sensitive, but glow continuously. Except when they run out of power. Which usually happens only at the most inopportune times.

Usually I hope a giant flock of pigeons craps on those cars with the stick figure family decals on them...unless the scene goes on to show T-Rex eating everyone...but I don't think I'd find these Marvel superhero versions...

This granite coaster set for chilling whiskey looks like it took slabs of the rock, cut out their centers, and went the donut hole route, turning those pieces into little stone ice cubes. So what you'll get is a complete...