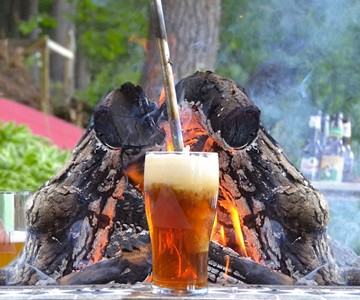 "Throw another lager on the fire," says the Beer Caramelizer. Yuk, yuk, yuk, a flavor-enhancing campfire tool after my own heart.

While on the surface heating a poker in the 1571-degrees-Fahrenheit center of a campfire, and then sticking it in your beer sounds more like an amateur drunk move than a deliberate action taken by connoisseurs of the drink. But according to the brew bros who make the Beer Caramelizer, this is actually a centuries old practice they're just bringing back to the bonfire.

The practice of "hot-rodding" your drink began with cocktails, most commonly one called The Flip, a mixture of spirits, brew, and sugar. Dunking a hot poker into the glass before drinking it spurs a reaction between the heat and the sugars, essentially caramelizing the beverage. The same reaction occurs in beer and other cocktails, with a resultant taste, they say, that's richer and smoother.

The Beer Caramelizer calls itself the adult version of roasting marshmallows, adding another dimension both to your beers, ciders, and cocktails, and your campfire experience. Made of food-grade stainless steel, the rod will take about 20 minutes in the campfire to glow red hot for its first use. Dipping just the tip (just the tip!) in your drink for 2 to 3 seconds activates the caramelization process, and won't turn your cold beer warm.

Check out the Beer Caramelizer if you need a beer gift for a bud, or just another party toy to add to your collection.