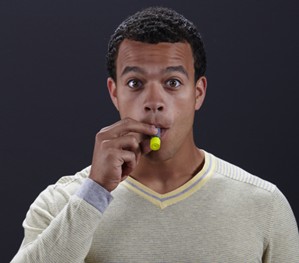 The long-awaited cross between an electronic cigarette and an asthmatic's inhaler has arrived! In 6 to 8 puffs, Aeroshot injects 100 mg of caffeine--the equivalent of one large cup of coffee--into your bloodstream. No more triple venti tar-and-sludge malarkey to choke down or spill on your crotch. This thumb-sized wonder is filled with a fine powder that dissolves instantly upon oral impact, taking you from Warp to Ludicrous speed in mere minutes. If you're a puff-and-pass kind of inhaler, you can hit the Aeroshot once, and then reseal it for the next user, or for later use. As a non-liquid substance, it is also TSA-approved! Even better, it's more fun than caffeine pills, free of the cloying tang of energy drinks and the saccharine sweetness of caffeinated marshmallows, yet as effective as all three. That's right, a few puffs of Aeroshot, a few Irish car bombs, and your night of awesome can still end with projectile vomiting and a trip to the ER.

Freshen your dry, acrid mouth, plus the churning belly action causing it, with NUDE Breath & Gut Mints. The dual-action pellets promise to relieve your body and its exhales of mask breath, coffee breath, odiferous food...

Hey there, fight fans, are you ready for a little Rumble in the J...ar? And really, it's not so much rumble-y as it is 200-micron-holes filter-y. But the cold brew this Rumble Jar cold brew coffee maker for mason jars...

Breathe in - ooohhh! - breathe out - aaahhh!. CyberPowerPC has just unveiled their Kinetic Series Chassis, an eye-catching PC case inspired by kinetic architecture, and made up of 108 triangular panels that form 18 moving...