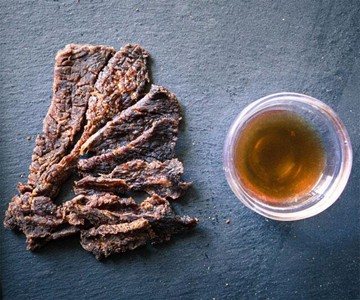 $7
from Get Some Jerky »
Check It Out

Usually if beef jerky burns as it travels down my throat it's because I bit off a fat hunk and didn't chew it enough and the burn is due to an oversized mass of dehydrated meat threatening to puncture my esophagus as it lumbers to my stomach. No joke, this has happened on several occasions. Sometimes I can feel it still lodged in some digestive canal for days. I've almost given up eating jerky for fear of this burn. And now Get Some Jerky (enunciated in the raaawwwrrr! of a grizzly bear snarl) is giving me a new jerky burn to fear: sweet, oaky, premium whiskey.

Black Label jerky begins as slabs of quality beef, produced locally in the areas surrounding Get Some Jerky entrepreneurs Alex Lane and Sarah Hellesen's Sacramento hometown. In addition to its whiskey glaze, Black Label is flavored with brown sugar, soy and Worcestershire sauces, and liquid smoke. It promises never to be dry, tasteless, highly processed, or the equivalent of a horned turtle lumbering around in your small intestine.