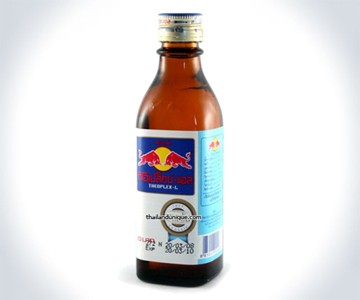 Red Bull creator Chaleo Yoovidhya died in March 2012, leaving behind an unparalleled energy drink phenomenon and industry. Not since Coca-Cola and YouTube spectacles involving numerous tabs of Alka Seltzer has a carbonated beverage caused such frenzy and reverence throughout the world. And let's not forget Red Bull's braggin' rights as first super-caffeinated hard liquor mixer to regularly prompt trips to the ER. Remember Thailand's native son Yoovidhya, his legacy, and the fact that Original Thai Red Bull is 3 to 4 times more "effective" than its Western counterpart with a 150 ml bottle of version 1.0.

Now, what they mean by "more effective" I'm not really sure. What's admitted is that Thai Red Bull is sweeter than US Red Bull, and that Thai Red Bull is non-carbonated, which makes it easier to chug. It also lacks our version's taurine, which is the amino acid I always thought gave Red Bull the wings it passes along to those who ingest it. I suppose there could be some secret ingredients--such as enzymes that boost caffeine's powers, or Bangkok sewer scorpion venom--in Thai Red Bull that make it the #1 choice of Muay Thai fighters jonesing to jack up their neurotransmitters prior to administering ass-kickings, but this information is not specified.

It's mini for a refrigerator, but maxi for a Coke can. Oh Coca-Cola Mini Cooler, let's pop a top and clink a can to the irony!...

Oh. Boy. Fresh. Sodie. Coming home to a Keurig Kold crisp Coke made to order is like waking up at 11 a.m. on the morning Daylight Savings Time ends and finding out you can sleep for another hour and still make it to Chicken...

Protect your beer from getting swiped, your hand from getting wet, and that hot little redhead from getting spilled on with your mission-ready Nite Ops Can Cooler. This koozie serves and protects on 3 fronts:...