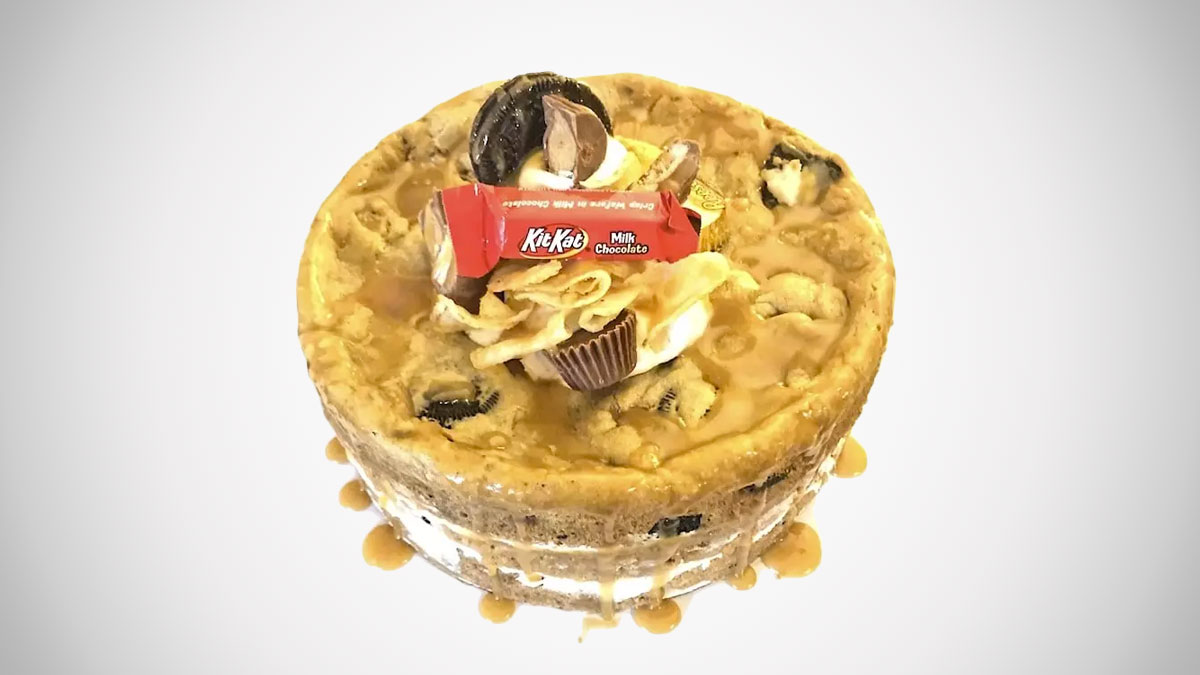 FattyCakesNY is cookies. On cookies. On cookies. With an occasional brownie and donut layered in for some textural variety, plus fillings and toppings of frosting, caramel, ganache, candy bars, and more sprinkles than a unicorn with allergies sneezes up in spring.

For example, let's examine the FattyCakesNY Big Poppa Father's Day cake. It's a Fatty slab of M&M and pretzel cookie sandwiching a triple chocolate brownie. For increased visual interest, and to push the per-piece calorie count into the quadruple digits, there are also layers of salted vanilla buttercream and chocolate ganache. And rainbow sprinkles. Rainbow sprinkles everywhere, Dad! Just in case the exploding glitter from the Joker Greeting farting Father's Day card I got you wasn't Roy G Biv enough to show you how much I care!

Jennifer Taylor-Miller, the lady behind the ridiculousness of FattyCakesNY, founded her cookie-loaded gut bomb of a business in her Brooklyn kitchen in 2009. It evolved from, no surprise, a love of baking cookies and, more surprising, a love of co-workers' challenges to bake uncommon ingredients into them. From Twizzlers to bacon to Pepto Bismol, Taylor-Miller did not disappoint. FattyCakesNY was the next natural step.

OK, I made up the Pepto Bismol part. But you have to admit, a bright pink preemptive attack against indigestion, it's not a bad add-in idea.

In addition to the Father's Day-themed cookie cake, FattyCakesNY has a series of standard offerings, including a Build Your Own option, in various sizes. Delivery is by mail nationwide, and FattyCakesNY packages their desserts to remain shelf stable at room temperature for up to 14 days, or frozen for up to 2 months.

Cake Pops, you're out. Cake Push Pops...Get! In! Mah! Belly! I'm not even a rainbows 'n' sprinkles kind of dude, but these stacked, spongy Roy G Biv treats from Flour Shop are making me all Veruca Salt levels of covetous...

The Giant Oreo Cookie Cake Mold is even pink. So there's pretty much no question I should give it to my wife, She-Ra: Princess of Power, as a Valentine's Day gift. And then invite her to use it to bake me a Giant Oreo...

Is it funny 'cause it's true? The witty, yet unfortunate Video Game Junkie Wedding Cake Topper is a Cynthia Niles custom design, made to order with a jumbo flat screen, and whatever gaming image, console & hand controller...