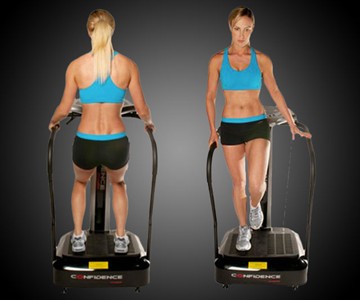 If you've ever watched TV at 3 in the morning you've probably seen the Power Plus Vibration Plate, or something like it, before. I've seen the machine making people's jiggly parts jiggle many times myself. But what I haven't seen previously are the eight hundred Amazon reviews of it, over half of which are 5-star, and the average of which get 4-1/2. Seriously? Is this thing in some way not a complete hogwash malarkey crock of a scam?

Claims the Vibration Plate makes include:

Bullshit, right? If there were just 16 glowing reviews I would say yeah, but can you fake 552 of them whose overall sentiment is "I love my jiggle machine!"? I'm curious. And if I were a lady, I'd be super duper curious. Vibrating for 30 minutes a day is pretty routine anyway, isn't it? Why not do it standing up with the possible added benefit of melting away muffin tops and improving sleep patterns?

According to manufacturer Confidence Fitness, their fitness machine's vibration plate oscillates at a frequency high enough to cause a stretch reflex within the user's body. In other words, it prompts involuntary muscle contractions in the same way flies and curls prompt voluntary muscle contractions. It's exercise without exertion (i.e., pain and misery) of conventional exercise.

In addition to the 'quake plate, the Power Plus Vibration system is fitted with yoga straps to provide some upper body vibratory work. Extend the straps in different positions to activate different arm, chest, back, and and core muscle groups.

Confidence Fitness claims 10 minutes on the Power Plus Vibration Plate is equivalent to 60 minutes of grunt work at the gym. Reviewers don't necessarily mimic those exact words, but many say they have enjoyed more restful nights of sleep, better fitting clothes, increased energy, and reduced joint pain. Also notable is that the Confidence Fitness vibratory wonder appears to cost less than half of what similar models do.

A 2021 Red Dot Design Award winner, The-O is a stationary exercise bike that doubles as "an appealing piece of furniture" when not in use. Its designers, Kim Dambi, Kim Kyung Jin, Park Sangjin, and Park Sung Soon, see...

"Pivot" was one of 2020's most pervasive buzzwords. And while Colin and Patricia Montgomery began working on their convertible PIVOT Bed in 2019, and it's now obviously 2021, the transforming bed-to-home-gym still hits...

Know what MonkeyFeet mean? No more sticking that dumbbell in your sweaty knee crease to do some donkey kicks and fire hydrants. The ability to do ham curls and weighted leg extensions without fancy gym machines. With...