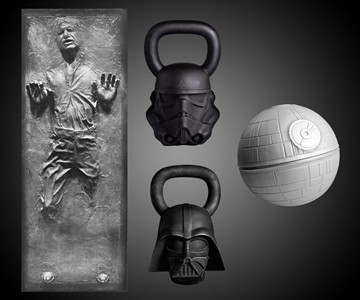 If you weren't sweating the Dark Side before, one round with Onnit's Star Wars fitness equipment, and I guarantee you'll start. From kettlebell swings to hot yoga, Russian twists to Turkish getups, Onnit is injecting some raw Imperial power into your workouts.

Don't look to Han Solo to save you either. He's stuck in both Carbonite and a yoga mat. One wrong move and you'll be a prisoner of power vinyasa's down dogs and chaturangas too. And the guy slamming the Death Star in the image gallery? Psshhh. It's not that kind of Force that's gonna penetrate its reactor core, dude.

The yoga mat is 5mm thick and reversible. In case the sight of Han in distress ruins the rest of the yogis' Zen and you need to flip him over. The mat is also moisture-wicking and non-slip.

The Death Star Slam Ball, essentially a 20-pound medicine ball, is made of dense polyurethane rubber and measures 10" in diameter. In addition to legitimizing its name, the trenches and ridges on the ball serve as grip enhancers.

Should you seek Star Wars gifts, or a gift for an athlete, at printing Onnit's Star Wars fitness equipment was up for preorder.

Not sure Matador Meggings are right for you, dudes? Not sure any leggings, even those designed especially for men and their anatomies, are masculine enough for a place on your legs and crotchal region? Well. Matador Meggings...