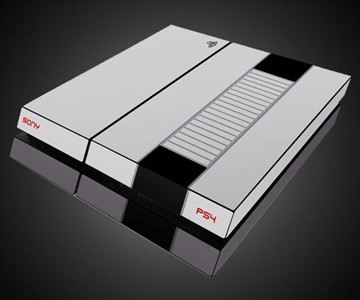 This retro Nintendo skin for the PlayStation 4 is what I'm giving to Cornelius as a Pre-Christmas and, more importantly, consolation gift since he will not be having sex with any regularity (i.e., at all) for the foreseeable future. I'm buying one for him instead of myself because I already got my best Christmas/birthday/year 2013 gift ever when his girlfriend dumped him the day after Thanksgiving. I'll tell you that story in a minute.

Decal Girl sends its nod of approval to simpler, 8-bit times with a Nintendo-themed skin for your brand spankin' new PS4. The decals are thin, yet tough enough to protect the system from minor scratches, and promise both bubble-free application and, should you ever experience sticker remorse, residue-free removal. The Nintendo skins come in either a high gloss clear finish, similar to that of automotive paint, or a matte/satin finish that eschews glare and fingerprints. Battlefield 4, say hello to your new launch pad. Hey! I don't want to hear it. NES was good enough for a scrappy pair of Italian plumber brothers, and NES is good enough for you.

So, yeah, my friend Cornelius' landfill-sized, Nintendo-decal-meriting recent dumping. It was unforeseen. It was unfortunate. It was devastating. For him. For me, it was glorious.

Part 1 of The Breakup I Was Praying to the Baby Jesus For is that Cornelius and his girlfriend came to my friends Constantine's and Victor's Turkey Day dinner after all. I don't know why their planned Vegan Thanksgiving didn't work out (flaky PETA hippies, I presume), but I was glad to have my buddy there, and drunk enough by 2 p.m. that I didn't care his self-righteous Winnie Cooper was along with him.

Part 2 is that we played Cards Against Humanity and when it was my turn to be the ref I got the prompt card, "You find a lot of these in heaven," and someone threw in, "Dead babies," which I picked both for its delightful tastelessness and balls-on accuracy, which grossly offended Cornelius' girlfriend...to tears...which made him have to go sit on the front stoop with her for 30 minutes while she calmed down.

Parts 3, 4, and 5 include: claims by Cornelius' girlfriend that she was deliberately misinformed about some dishes' meat, dairy, and gluten contents, resulting in her consumption of items that required 4 separate vomiting trips to the bathroom; Cornelius smoking a fat bowl Victor lined with super-concentrated THC oil to take the edge off, and getting stoned out of his gourd; and my friend Carla's mom, who is frumpy, squat, over 60, and, despite Cornelius' most valiant efforts to argue otherwise, does not have full and tantalizing lips that are easily mistaken for Cornelius' girlfriend's.

Merry Christmas to me.

Trick out your kicks, make your sneaks snazzy, and jazz up your Jazzercise shoes (Mama) with this set of Shoe Tattoos from Wear Your Sole. The decals are semi-permanent, but removable, and made for enhancing leather footwear...