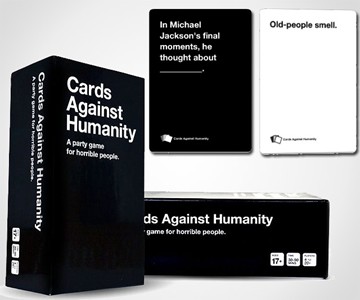 Cards Against Humanity is basically a more blatantly raunchy and politically incorrect version of the game Apples to Apples. And Apples to Apples is basically an evolution of Mad Libs that better lends itself to large group participation, and alcohol consumption (no pesky pencils to manipulate after those Jack and Cokes). Ergo, to play Cards Against Humanity, all you have to do is check your tact at the door, grab a handful of cards, and prepare for total immersion in raucous, drunken, and possibly nude revelry.

The game is simple. Each round, one player draws a Black Card, which contains a question, or a fill-in-the-blank statement. After reading it aloud, the rest of the players anonymously submit to the Black Card Czar the juiciest of their 10, blindly-chosen White Cards to complete the thought. The Card Czar then rereads the Black Card, infilling each of the suggested White Card phrases where appropriate. The Czar's favorite White Card wins the round, and its owner comes forward to claim a point, and take over as the next round's Card Czar.

Or, you may request other Humanity players fill in the following statement: "_______: kid tested, mother approved." How about, "Michael Jackson," "Third Base," or "Classist Undertones?"

Cards Against Humanity was a Kickstarter project created by Chicagoan Max Temkin. Here are a few reasons why Max Temkin is cool: