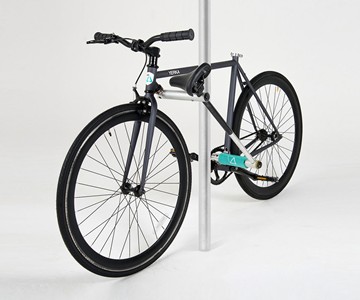 You may have seen the YERKA and its integrated, supposedly theft-proof locking system floating around the Internet before, but today the Chilean bicycle designers have officially launched their crowdfunding campaign in an effort to transport the YERKA from the virtual streets of the web to the actual, sticky-handed streets of your neighborhood.

The YERKA bicycle locking system consists of a casted aluminum lock built into the seat and down tube. When it's time to leave your bike unattended, its saddle and seat post lift to remove, while the tube disengages and opens outward at its midpoint, revealing a set of cutouts at the top and latch at the bottom. Slide the seat post through the holes, insert its end pin in the bottom of the tube, and remove the YERKA pin/key to lock. With this type of security system in place, a thief would have to cut through the entire main structure of the bike to steal it, thereby removing any value the "score" might have had.

Check out a GIF of the YERKA locking system in action here.

In addition to the frame's security provisions, YERKA's wheels will also include anti-theft nuts (accessible with an included key), as well as a built-in Bluetooth system so riders can always find their bikes if they happen to forget where they locked it.

YERKAs come in a variety of colors, which backers can select when they pledge for their own unstealable bike on IndieGoGo through April 18, 2015.

If you're thinking this Invisibeam Field Disturbance Sensor for Vehicles is some real James Bond shit right here, you're...a little off. Despite its formidable, spy-worthy name, the Invisibeam Sensor is sort of just another...

Monowheels debuted in the late 19th century, but Monovelos claim to be the inaugural human-powered installation of the 21st. A nested unicycle of sorts, the Monovelo pedals and steers similar to a conventional bike, but...

I wonder which is less comfortable: Jimmy Kuehnle's Invisible Bike or Jimmy Kuehnle's invisible outfit. In other words, would you rather require rectal surgery or pass out from heat exhaustion and develop a full-body...