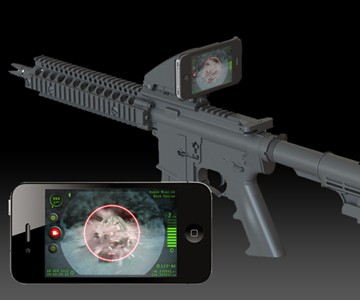 $99
from Inteliscope »
Check It Out

It's a tactical time of year. Crossbows, BBQ aprons, and now a forthcoming rifle scope and rail mount system that shakes up the shooting game by using an iPhone/iPod and mobile app to give readouts of critical ballistics, and provide environmental insight in real time. The Inteliscope attaches one of Apple's smart devices to any firearm with a Picatinny (Mil-STD-1913) or Weaver tactical rail, and grants shooters access to:

On the surface, it may seem that taking your iPhone hunting or empty beer can shooting, and mounting it right on top of the destructive apparatus you'll be using to carry out the activity, demonstrates a lack of common sense. But if you really think about it, doing that is probably safer than getting drunk and taking your phone with you into the john.

The Inteliscope system is scheduled to launch in June 2013. The company is currently accepting pre-orders (and payment).

Designer Rainer Wenning calls his Waves MFS a "physio-tactical" palm stick, which might be the best bit of pretentious, made-up terminology I've ever heard. Because what "physio-tactical" basically means is that after...

The MecArmy PS14 is a 1200-lumen tactical flashlight able to shine its super bright beam, in full, around 330'. It is IPX8 water-resistant for use even in heavy rains, and even has a trident tail section for emergency...