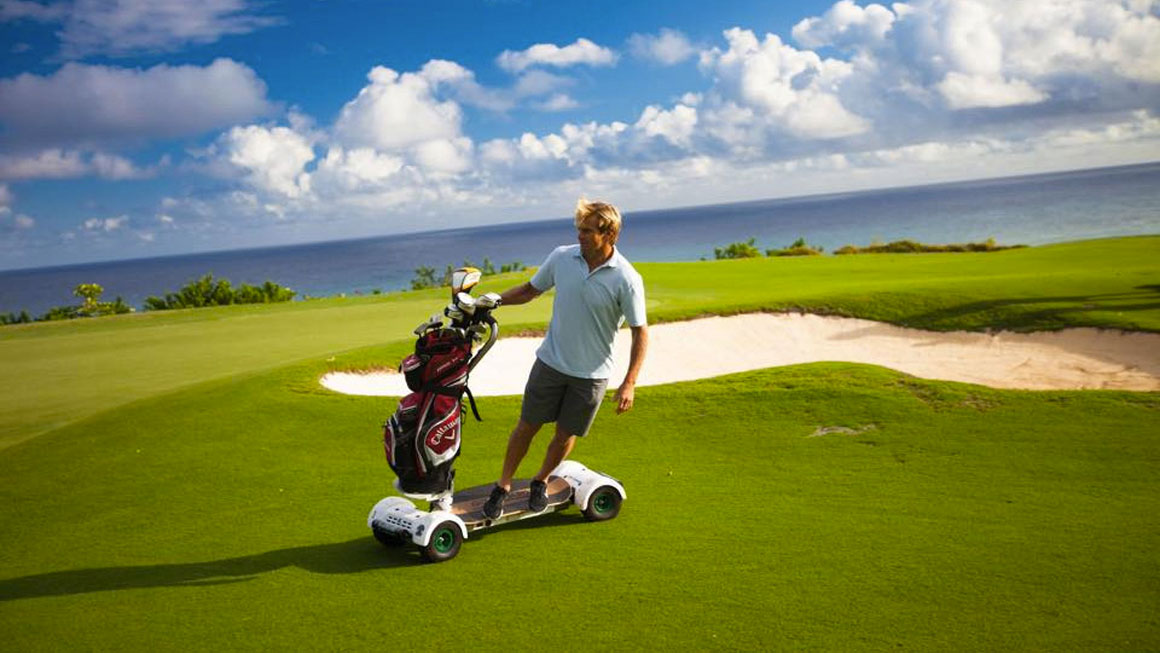 I'm sure serious, elitist golfers have long been wondering when their posh country clubs were going to figure out a way to incorporate skateboarding into their rolling 18 holes of pristine greens. Well, lads, this is your lucky day: the GolfBoard has arrived.

GolfBoard promotes itself as a means of eliminating the "sedentary activity of sitting in a cart." This rideable greens surfer will also increase the speed of play and, according to its makers, actually reduce wear on turf. Its makers also promise that the standup transporter is intuitive to operate and easy to ride, tearing along courses at up to 14mph. The machine has 4WD and posi-traction, with gear boxes in the front and back rather than chains or belts. The GolfBoard's tires were designed specifically for turf use, bringing stability and no-spin traction, plus a gentle ride to both the golfer and the turf.

GolfBoards are available in Commercial and Personal Use models, each with "low speed" and "high speed" operation options. They are powered by a lithium-ion battery that can carry them 18+ holes between charges.

The Hovertrax has no learning curve and requires no skills to use, which is good because you can bet that if I'm too lazy to walk myself down the street or hallway, I am definitely too lazy to learn how to use a complex...

eWheels V2 - Turn Any Pushcart Into a Smart Caddy

The eWheels V2 Caddy is just like the kid you'd hire to carry your golf clubs, except you don't have to make polite conversation with it, or tip it after the 18th hole. This pushcart add-on turns your club toter into...

Despite their being shaped like big Os, I'm not sure about Big-O as a name for these stunt skates. I'm pretty sure if I were to try them, the words "Big O" would not be at the forefront of my mind. I'd call mine Big I...