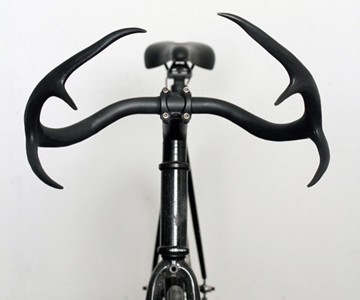 Taylor Simpson accidentally plowed into a deer with his Knight XV while barreling through Poughkeepsie several months ago and felt so bad about it he swore off driving altogether and converted the slain buck's antlers into a set of handlebars for his new, two-wheeled form of transportation as an homage to the great beast, and means of rendering its death slightly less in vain.

Just kidding. Simpson made the antler bike handlebars for a school project. He's studying at Pratt Institute and had to do something or other on product branding and packaging, so he grabbed a set of deer horns, some recycled metal, a tube of epoxy, and...voila. Pimped. His. Ride. They look pretty cool, but I'd be hesitant to use them. I mean, as much as I'm the spin class mac, I don't fare so well on bikes that actually move. And given that falling off a bike fitted with antler handlebars would mean certain impalement and probable casket shopping, I think I'll settle for just looking at them.

Sure, a 120 dB electric bike horn could be a nuisance. Say, for example, attached to the handlebars of a gang of 8-year-olds' bicycles, and sounded every half block in ear-rupturing unison, or a cacophonic orchestra...

Look like a style icon riding your bike with this baseball hat bicycle helmet...

Not only do these wall-mounted bicycle holders from PARAX take up virtually no space in your home (though the same can't be said for your bike itself) they look almost artful doing it. PARAX's S-RACK and L-RACK model...

"Price on application." Not good news for anyone who wants Extans' Akhal Shadow Bike for anything more than a pipe dream. Or a photo on their desktop. But even as the latter, you have to admit this bike, inspired by the...