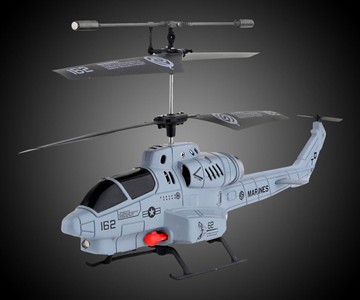 Do you like RC toys? Do you like dinking around on your iPhone? Do you like pelting things, such as red Solo cup targets and sleeping housemates' heads, with plastic missiles? Do it all, and simulate the flight of a Cobra helicopter with this iOS-controlled, missile-firing iHelicopter.

In tandem with the free udirc-pro flight app and an included transmitter for headphone jack attachment, just about any iPhone, iPad, or iPod Touch can pilot the Cobra iHelicopter. In addition, the app's A/B/C band selection enables flying up to 3 Cobras freely in the same general area for group missile battles and wiling away the summer partaking in one more non-productive activity that is contributing nothing to the elimination of the weeds overtaking your mama's flower beds. The helicopter's coaxial structure ensures a stable flight and steady fire of its 2 flanking rockets up to 6+ feet.

Each iHelicopter package includes the 100% assembled Cobra, 6 x missiles, 2 x tank shooting cardboards, the rechargeable transmitter and USB charger cable, 2 x spare rotor blades, and a spare tail propeller. The helicopter measures 8.7" x 1.9" x 4.13", and can move forward/back and with left/right rotation, as well as hover and land with the iOS controller. Control range is 33 to 50 feet. Transmitter charge time is 2 hours, and iHelicopter 45 minutes.

Grab your Cobra iHelicopter courtesy of Dude Exclusives for 28% off while supplies last!

The iOS-Controlled Cobra iHelicopter with Missile Fire is a top Dude Gift for a Teen pick.