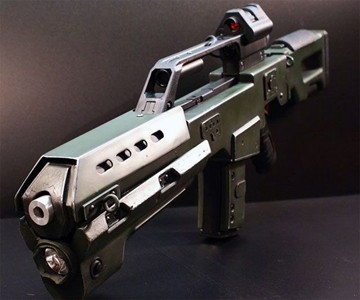 Here's something awesome I did yesterday: drove to the coffee shop, parked my car in the garage underneath, regaled you with a small handful of product descriptions, and then walked home. Boy was I surprised a couple hours later when I went outside fixin' to take the Mazda for ice cream. The moral of the story is, people with only half a brain should not be trusted with guns. That's why I don't own one, and why I believe everyone who applies for a license should be subjected to standardized testing of rational thinking skills and common sense. Also hand-eye coordination and swagger. Prop replica guns, though...I guess any asshole can go ahead and buy those. This asshole, for one, has his eye on the Hero Rifle Karl Urban's* Reaper used in Doom.

Creator Kingpin often applies the "Museum Quality" designation to his creations, which, to quote the great Viper, "is pretty arrogant, considering the company you're in." But a close examination of the Hero Rifle, plus quick once overs of his Aliens M41A Pulse Rifle and Judge Dredd Lawgiver, suggest his confidence may be justified. That we may be looking at the Maverick of the movie prop replica industry. Hopefully Kingpin doesn't have a wingman. I can't handle any accidental deaths or crises of conscience in this story. I already had to stomach Goose biting it in 3D last month.

The Hero Rifle's heft holds strong with all metal screws--no glue here--and Kingpin treated its exterior with a custom weathered paint job. At first I accidentally wrote "pain job" instead of "paint job". I bet both are accurate.