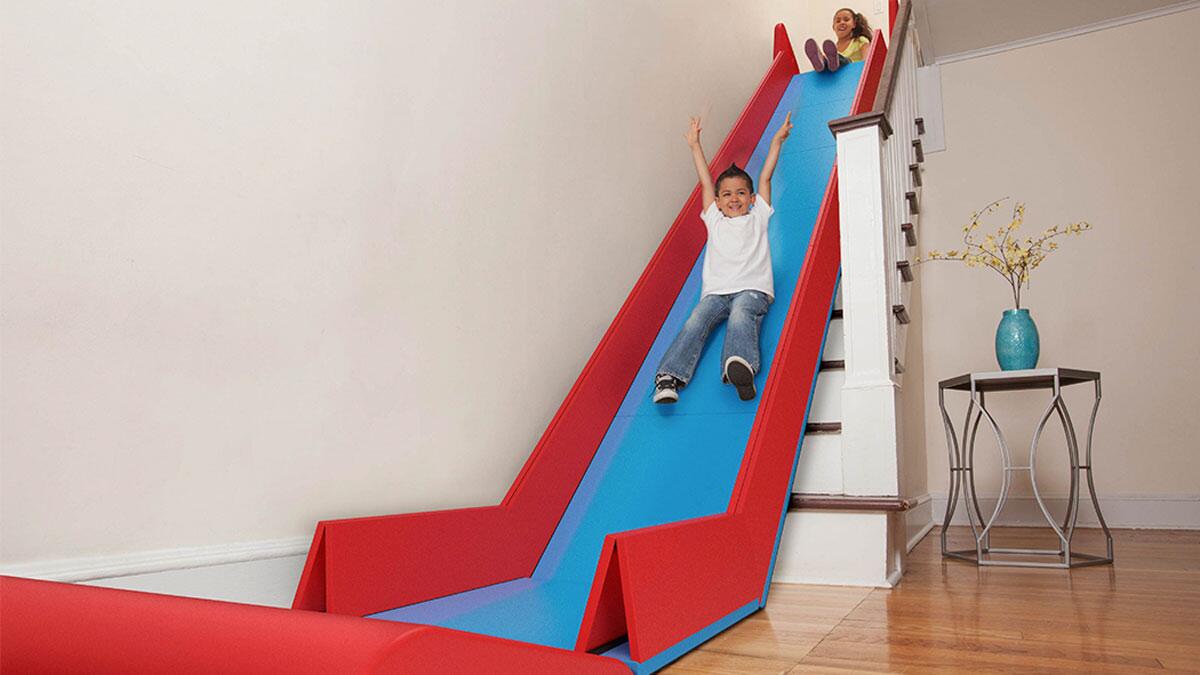 Trisha Cleveland invented the SlideRider for children. She took the concept to Quirky, refined her indoor stair slide's design, and is now in the midst of exploring branding and pricing options with feedback from the inventor's site's members. With children in mind. If all goes well--and if the SlideRider's Facebook explosion is any indication, it will--Cleveland and Quirky will manufacture and release the Chute of Champions nationwide. For children.

How much you wanna bet half the eventual SlideRider purchasers will be over the age of 18? And drunk stair surfing will become the #1 game at all frat, and then cocktail, parties across the country, as well as the #1 reason for ER admission on Friday and Saturday nights?

The SlideRider is made up of a series of sturdy but soft folding mats. It stores neatly in a cube when not in use and then unfurls along a standard staircase, transforming in minutes into a slide, when play/double dog dare time arrives. A weighted top and high-friction, grippy bottom hold the slide in place, and built-in side rails prevent users from slipping off on the way down. A bumper at the end of the run either stops forward momentum or helps propel those who get a really solid launch into the air for a crowd-pleasing faceplant.

Quirky is currently seeking a manufacturer to mass produce the SlideRider. Interested sliders can track progress by following the link below.

There Are Moms Way Worse Than You

Horizontal is certainly my favorite way to do most things, so why wouldn't it appeal to parents too? Horizontal Parenting: How to Entertain Your Kid While Lying Down is a manual for moms and dads who just need a frikkin'...

Daddy wants a Tesla Cybertruck for Christmas? Too bad. The executives at Mommy's company are hoarding all the money they could be sharing with the people who do all the work, so she only has enough to buy a Tesla Cyberquad...as...

A Batman Car Seat?! Kids these days are so spoiled. When I was of car seat age my mama didn't even put me in a car seat. She strapped me down with bungee cords. And only on the inside of the car instead of the roof on...