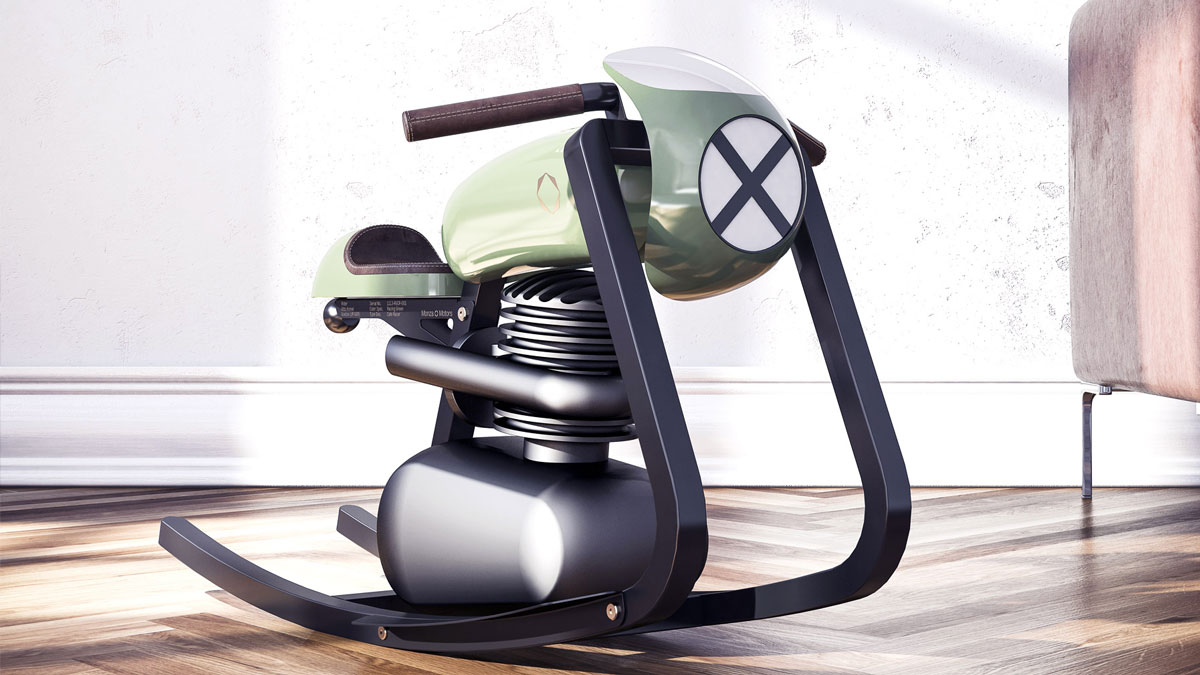 Now this is the kind of Moto I'd like to say hello to. The Moto Rocker, a cafe / brat / track racer for kids, is the brainchild of industrial designer Felix Monza. A rocking horse built for the 21st century, where kids of yore played at mimicking their daddies riding off to work on his Arabian or American Quarter, the Moto Rocker invites them to pretend they're Pops heading out on his Harley Scrambler or Ducati Roadster.

Monza says he's designed the Moto Rocker will all key details of a real motorcycle so rocking kiddos can experience an authentic feeling of riding. Huh. So he's saying he's made bobbing back and forth on a pair of concave metal rails feel just like motorized forward movement and turns at high speeds on a pair of in-line tires? Huh. Well...yeah, they're kids, they'll never know the difference.

The Moto Rocker features a one-cylinder 125ccm engine, a head light, and a tail light (all non-functional.) Its seat is handmade from genuine leather. If you're willing to spring for a rocking motorcycle for your kiddo, Monza will place his or her name on the Rocker's frame bracket, along with the serial number and version details. You'll also have a choice between a cafe / brat or track style Moto Rocker to suit the type of flooring in your living room, as well as the "bike's" tank color.

The Moto Rocker is suitable for children ages 1-1/2 to 4, and can support weights of up to 110 pounds.

I hope you're ready to have a seat, because these 15 stunning sculptural chair designs are going to knock you off your feet...

The Hydra Guitar might not have as many heads (well, necks) as its mythological namesake, but it has 3 times as many as a standard guitar and, more importantly, looks to have the same disposition as its serpentine sea...

According to Reddick, "Voyager is a boutique modular guitar designed for the gigging musician." And if this Dude is anything, I am...farther away from being a gigging musician than The Beatles are from getting back together...

Rough life this guy has. Timing the tides. Towing his Sveglio Volo all the way across the beach and into the water. Settling into its hammock and getting a gentle rock going just as the sun starts to set. I bet it's a...

I like that this outdoor hammock lounger's design suggests I probably won't flip sideways or spill out onto my belly trying to get in and out of it. But I do have some concerns about ending up ass over teakettle. The...

Dude. This StoryTime Rocking Chair for 4 (1 and 3 halves?) is so adorable it makes me want to have kids of my own to rock and read to like a wise father with exceptional taste in functional furniture...

I'm feeling easy / Easy Outdoor Zero Gravity Rocking Chaise Lounge like Sunday morning. Admittedly this outdoor lounger looks like a bit of a...contraption...to assemble and use, with its multi-plane seat frame and foot...

This is a UFO. An Unidentified Furniture Object that Italian design firm It One Off created in a nod to little green men, living room acrobatics, and a nifty construction technique called "one ground point" they say the...

Those who would rather sway than snuggle at the tailgate and 'round the campfire this fall can go for GCI Outdoor's Freestyle Rocker over Kelty's Low Loveseat chair. This standard-height seat is fitted with a spring-action...