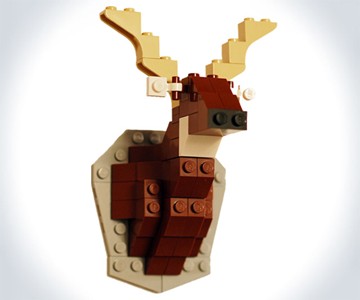 Unlike the Grizzly Robotic Utility Vehicle, this nugget of LEGO taxidermy would be way cooler if it were bigger. When I first saw it I thought it was a life-size LEGO deer head and I was like, "Yahtzee! Cornelius is gonna be so jealous." Then I continued scrolling through the photos and figured out the one of a guy holding it in the palm of his hand probably means it is small enough to fit in the palm of your hand. That's OK though. Even a LEGO deer head sized for minifigures adds to the overall joy that LEGO infuses into the world. And Cornelius will still be jealous when I get one because he's petty like that.

David Cole has compiled 60-piece kits of LEGOs primed for deer taxidermy assembly, which is kind of ironic given that deer taxidermy usually materializes via a process of disassembly. Most pieces are new, although due to part sourcing, a few end up lightly used, and the set includes instructions Cole has hand-drawn himself.

If you thought beating Super Mario 64 was hard to beat, get ready to try to conquer LEGO's new 2,064-piece Super Mario 64 Question Mark Block build. It might feel a little like banging your head against a...question mark...