When Hitler Took Cocaine and Lenin Lost His Brain 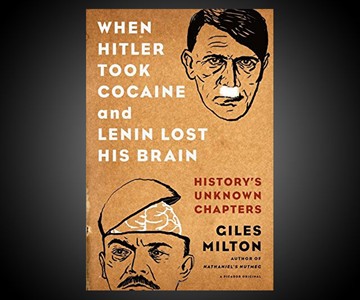 In When Hitler Took Cocaine and Lenin Lost His Brain, historian Milton relays some of the most obscure and entertaining stories you've never heard about some of the past's most famous people and events. He intends History's Unknown Chapters to read with accessibility and humor, intelligence and Holy Hiroshima, are you kidding me?! (Maybe you'll say it when you hear about the dude who survived the atomic bomb in both Hiroshima and Nagasaki.

When Hitler Took Cocaine and Lenin Lost His Brain spans hundreds of years and and an array of historical topics, from adventure and murder, to slavery and spying.

Supersize your efforts to write it down or sketch it out with these handmade jumbo leather journals from Lake City Leathercraft. The tomes measure 13" long x 10" wide, and come in a variety of embossed and bejeweled styles...

Word nerds probably thought they had it made when we went from clocks that read 12:00 to clocks that spell out the time in words. But now the Author Clock thumbs its nose at both of thee's, making the hour and its minutes...

The covert HemiSERE Titanium Lapel Knife isn't just some piece of urban-spy EDC Gearward designed for us to geek out on (though it's a little that too). It's a contemporary take on a real issue, the OSS Lapel Knife, clandestine...