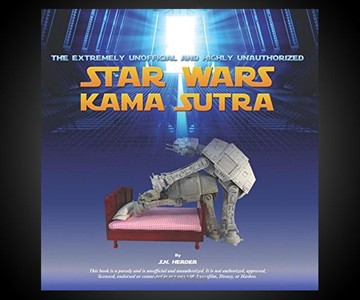 SN Herder has thought a lot about the Force awakening. So much that his mind went...there. First the gutter, and then the toy bin. Herder says he made The Extremely Unofficial and Highly Unauthorized Star Wars Kama Sutra for "Star Wars fans with a slightly twisted sense of humor." He stresses that the book is a parody, all in good fun, and, of course, superlatively not approved by Lucasfilm or Disney or whomever the hey gets to say Yea or Nay to making a buck off Star Wars these days.

As the book's cover suggests, the Star Wars Kama Sutra is largely a photographic compilation of Star Wars action figures getting down and dirty in ancient Hindu (plus some brand new, physically unachievable 21st century) sex positions. Herder has given all of the Star Wars action figures he's personally collected over the years--even Jar Jar Binks--a role in his explicit acts and roleplaying games. Each scene is titled, with choice selections ranging from "Luke Warm" and "The XXX Wing" to "Han Shot First" and "Two Girls, One Cup...of Bantha Milk." Herder wraps up his tribute with some Star Wars Kama Sutra haikus.

I'm not really sure why Woo More Play's sensual massage oil candle is named "Eat Me Out for Once." As far as I can tell, the muscle-rubbin' lube the melting wax of the candle produces is scented with sandalwood, papyrus...