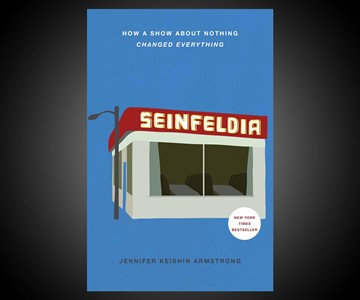 Neither Seinfeld nor David wrote Seinfeldia, TV historian and entertainment writer Jennifer Keishin Armstrong did. If you're curious whether or not she does the Soup Nazi, man hands, marble rye, and puffy shirts justice, check out How a Show About Nothing Changed Everything. If you hate it, you can always re-gift it to your friend Cornelius.

Yippee Ki Yay, motherfu- uh...dudes, it's a Die Hard Advent Calendar! Leatherhead Laser Work even laser-cut his clever, original countdown design to depict one of the best scenes in the movie: Hans Gruber plummeting to...

The Mini Jumbotron! It's an oxymoron for your mancave! An oxymoron that's so cool it's fire too, with the design's quad of TVs able to pump out 4 different channels for sports fans during the NCAA Tournament or on NFL...

Honestly, The Christmas Movie Cookbook doesn't appear to have many recipes I'll actually want to make - or even request my mama make for me. Old Fashioned Meatloaf from A Christmas Story? Chicken, Broccoli, and Cheddar...

Halloween Ends is coming to a streaming service near you, and possibly to your kids the moment they see this 35-foot inflatable Michael Myers in someone's yard when they're trick-or-treating this year. And in both cases...

Red light, green light, wake up! Or prepare for the Squid Game Doll Shooting Alarm Clock to eliminate you. ... OK, she'll just pelt you with a foam bullet, but still. This piece of Squid Game merch might be the creepiest...