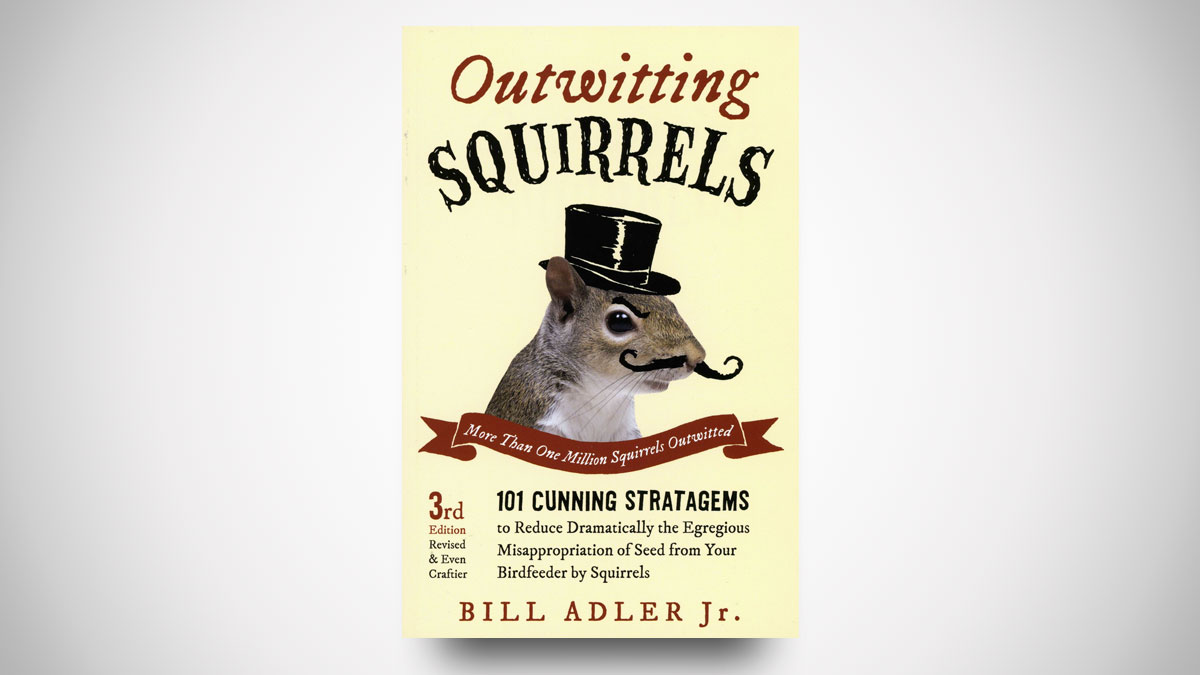 I'm going to spoil Outwitting Squirrels for you and just say it: can't be done. Bird and bird feeder enthusiasts still love Bill Adler Jr.'s book about 101 Cunning Stratagems to Reduce Dramatically the Egregious Misappropriation of Seed from Your Birdfeeder by Squirrels though. Because Adler has personally tried, and provides full, hilarious, and relatable reports on all 101 of the tactics he's tried. And, in this 3rd edition of the book, that he's updated to "deal with the more tech-savvy twenty-first-century squirrel."

Outwitting Squirrels was first published a few decades ago as an outlet for the frustration anyone who owns a bird feeder has experienced trying to keep those bushy-tailed, bloated-cheeked sonsabitches out of it. It's supposed to be a defense manual, but seems to be more of a comedic and cathartic report of failure. After failure. After failure. Some of Adler's 101 cunning strategems include Perrier bottles, Vaseline, cayenne pepper, and water bombs.

But mostly they include failure.

Outwitting Squirrels is a top Dude housewarming gift pick for anyone you know with a bird feeder and a vendetta.

Bow-Wow, Squeak, Squawk, Meow. I know. I forgot Ssssss, Ribbit, and Cocka-doodle-doo in my noisy intro to pet gifts for 2021. But that's not because I don't care for snakes, frogs, and roosters, just because I happened...

Whoa, this Squirrel Tree Climber statue for your garden is so realistic neighbors and passersby are going to take one look and think they're as nuts as the acorns the squirrel has belayed himself up to get. Hand-painted...

It took some real bird brains to come up with this fine feathered gadget. Bird Buddy is a smart bird feeder with a built-in camera that ensures you'll never miss a tweet. Using motion sensors, a microphone, and facial...

Hand-, or rather, finger-feed your garden's most adorable guests with a Hummingbird Ring Feeder. The oversized ring is a scaled-down version of a standard plastic hummingbird feeder, with a bottom reservoir for the sugar...

Everything that passes through this food truck's window is cheep, cheep. The Cheep Eats Food Truck Bird Feeder gives all the little tweeties in your garden a roomy place to perch and pick through a sunflower, millet...