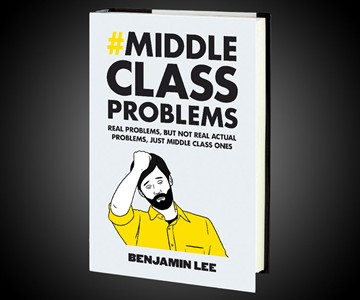 Lee began his @MiddleClassProb Twitter account in 2010, and last year released a Middle Class Problems book as a way to consolidate the most horrifying examples of bourgeois hardship. Lost iPhones. Downloading the wrong book to the wrong Kindle. Feeling like you've forgotten how to ski. Overcooking the quinoa. Going to a raw bar just to have their hamma-hamma oysters and being told they're out of hamma-hamma oysters. And the worst, the absolute worst: getting to a 6:00 a.m. spin class 15 minutes early and still not being able to secure a bike in front of the fan. Fuck. That.

If you know someone who could use a little perspective in life, Middle Class Problems could give it to them.

Or it could just give them a couple hundred pages of people to commiserate with, and get them even more worked up about having pulled an @hulricat, accidentally ordering 3 bags of ground organic fair-trade coffee instead of whole bean too!

Subpar Parks: America's Most Extraordinary National Parks and Their Least Impressed Visitors is a tour guide through our country's finest specimens of Mother Nature. It is also a comedic compendium of reviews from people...