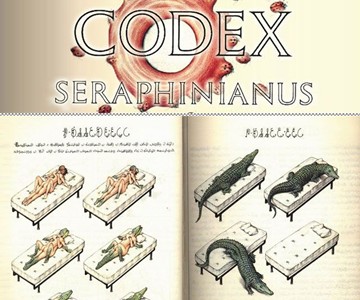 Speculated to be an homage to--or copy of--the Voynich manuscript, a to-date undecipherable codex hand-written in the early 15th century, the Codex Seraphinianus is getting a 2013 facelift courtesy of Serafini himself, who has redesigned its layout and added new illustrations. The visual encyclopedia still contains 11 chapters, which divide its bizarro world into two parts, nature and people.

If Her creeped you out (and let's face it, just looking at Joaquin Phoenix for more than 30 seconds straight can sometimes do the trick) get ready to have your stomach turned inside out again: EmoSpark, an Android-powered...

Communication, so the saying goes, is key. How appropriate then for the bilinguists of the Galactic Republic to provide us with this Translator Ring, a finger-sized key to communicating with the Huttese. Imagine how Jabba...

Who would claim you can "get smarter while swearing at your friends?" F**kin' Australia, mates. F**k. The Game is an Aussie issue, and a mind trip of cards and colors and good ol' cussin' for us all. It's a spirited party...