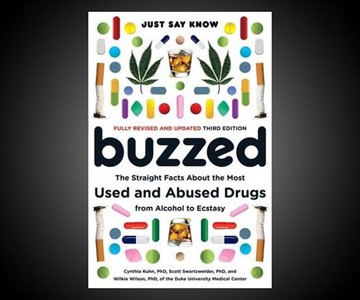 These are just the facts, dudes. Clinical reporting with complete objectivity. Nothing about how Smirnoff Whipped Cream vodka in a Shot Gun is a terrific way to break the ice with the ladies at a party. Nothing about the magnitude of genius you'll attribute to Lionel Richie for his description of the feeling--oh what a feeling!--of dancing on the ceiling after you've eaten 4 mushroom caps and a couple of stems. Buzzed: The Straight Facts About the Most Used and Abused Drugs from Alcohol to Ecstasy cuts through any nonsense, romanticism, social stereotyping, and emotion connected to drug and alcohol use, and gives us just the scientific breakdown of what they are and what they do.

According to Buzzed authors Cynthia Kuhn, Scott Swartzwelder, and Wilkie Wilson, "The gap between scientific information and public information about drugs is growing hour by hour," due largely to the latter's being clouded by the oversimplified, inaccurate, or politically-charged reporting of drugs' benefits and risks. Marijuana, as a prime example, is heralded as the Wonder Drug by some organizations, while others deem it a dangerous destroyer of human life and worth. Buzzed seeks to circumvent these pitfalls by presenting accumulated data and research, and then stepping back to make room for readers to develop their own opinions on and qualifications of the substances.

The Third Edition of Buzzed has been revised to include information on newer trends, such as energy drinks, the date-rape drug GHB, and haute pharmaceuticals OxyContin and Ambien. All the straight buzz on Buzzed classics from alcohol to nicotine to heroin to Chick-fil-A Chicken Biscuit breakfast sandwiches are still inside too.

Buzzed is divided into 12 sections: Alcohol; Caffeine; Ecstasy; Hallucinogens; Herbal Drugs; Inhalants; Marijuana; Nicotine; Opiates; Sedatives; Steroids; and Stimulants. Ha! They're even listed in alphabetical order to further remove subjectivity and avoid accusations that the book has been organized from Most to Least Awesome Drug or Worst to Best Substance to Ingest Just Prior to Meeting Your Girlfriend's Parents!

These Bong Butt Plugs are smokin' hot! Though I'm not sure if it's from the Blue Dream or the 3 bowls of Four-Chile Chili I ate during NFL Sunday coming out of them...

Get a grip on your puff-puff-pastime - a real solid grip with this Glass Knuckles Smoking Pipe. Lightweight and made especially for a 5-fingered grip, the pipe gives smokers two options for their inhalation pleasure:...