An Illustrated Book of Bad Arguments 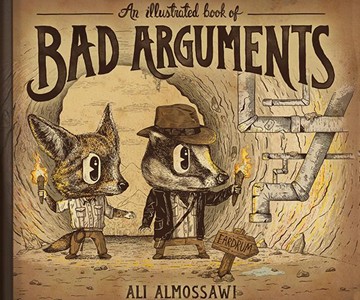 Know what they say? If you're arguing with an idiot, make sure he isn't doing the same thing. Know who heeds that advice? Almost no one engaging in an argument on the Internet. But author Ali Almossawi has decided to retaliate against this ubiquitous irrationality that has overtaken online forums and comments sections.

An Illustrated Book of Bad Arguments attempts to show Internet discourse the error of its ways by reintroducing old-school, Aristotle-approved logic. And I guess by incorporating drawings and anecdotal comparisons, Almossawi hopes the ignorant jerks, pigheaded fools, and complete idiots dominating our Age of No Reason might actually be able to understand it. Bad Arguments identifies and explains our most common lines of poor reason, as well as why they fall short, and then calls upon some sweet and nonthreatening critters to provide examples of the faux pas in action. Some examples:

The Appeal to Ignorance: Rabbit thinks a strange light in the sky has got to be a UFO because no one has proven it isn't a UFO.

The Argument from Consequences: Lion refuses to believe that gas emissions harm the planet because if they did...that would suck for him.

So before firing ourselves up for another gun forum foray or battle in the YouTube comments section, Almossawi hopes we'll also think about arming ourselves with the insight, knowledge, and sweet pictures housed in An Illustrated Book of Bad Arguments.

Oh how I love to read about cognitive biases to see all the ones that apply to my father-in-law, my Aunt Jan, and my black-hearted ex-girlfriend Karen...

Who's angry? Who wants to get angrier?! Well then, here's Crazy Aaron's Angry Putty, at your service. That's my guess, anyway, because I can't imagine a squeeze, stretch, and fidget toy self-described as "Putty That Fights...

To be clear, the Internet flies in only one direction down Outernet's information superhighway*. Each day, a 1 GB dose of data funnels through a dish antenna and lands in the company's Lighthouse receiver, where it is...

20 Gifts for Every Mood

Life: it's a whole mood. Which is to say it's a mashup of all the moods. Here, I've picked out 20 of them, and paired them with a gift, a product that either exemplifies the mood and the feelings that come with it, or...

It doesn't connect to an ejection seat or the trap door above a tank swarming with electric eels and Mariah Carey after a 3-day fast, but the Big Red Button rage relief device does provide considerable catharsis for the...

Like the Cybertecture Mirror from Tech2O, POSH View's iMirror seeks to bring the internet to a place the company says we spend over 168 hours, or 7 full days, every year: the looking glass...