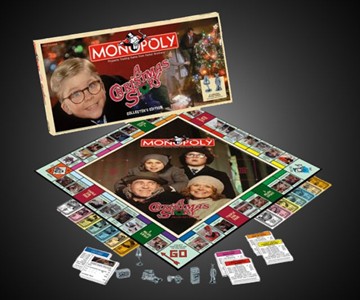 When you're finished Monopoly-izing zombies in the Walking Dead version, I triple dog dare you to get into the holiday spirit with A Christmas Story's take on the beloved board game. Who wants to have a BB gun-off for the Ralphie's cracked glasses playing piece?

A Christmas Story Monopoly isn't a new special edition of the game, but at this time of year--and given that 2013 is the movie's 30th anniversary--I think it rises to a status of most special special edition. Players represented by the Fragile crate, Ralphie in his bunny suit, the leg lamp, a bar of mouth-washing soap, Old Man's car, and the busted frames travel around the board buying up film favorite places and items, such as Chop Suey Palace, a bowling ball, and the frozen flag pole. Chance cards are now Triple Dog Dare cards, and Community Chest cards A Major Award.

A Christmas Story Monopoly Gameplay Suggestion: Augment the nostalgia and entertainment value, plus numb the pain of basically an entire month's worth of sanctimonious aunts and cousins under the age of 5 demanding piggy back rides and smartphone upgrades, with some Christmas Story shot glasses and a little Major Award drinking game. Every card drawn = a couple more downed ounces of spiked eggnog.

As much as I'd like to be the cleverest dude in the land, and write this Wordle Beanie description using a progressive 6-part Wordle, doing so would take me even longer than it does to solve an actual Wordle, and I just...

Remember that one time ThinkGeek released a Game of Thrones edition Clue? It had 69,120 possible suspect / location / weapon combinations* spread over 48 suspects, 30 locations, and 48 weapons! That was awesome! But then...

Gemmy's A Christmas Story 8' Living Projection Airblown Inflatable might be the easiest way to make sure your house is the one cars park outside to stare at this holiday season. ... Maybe tied with tossing together a...