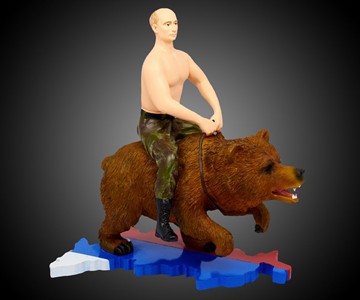 Chuck Norris was like, "Uh, Vladimir Putin just asked if he could see my bear, and then hopped on and rode off on it," and Robert Kraft was like, "Yeah, join the club, dude! He did the same thing with my Super Bowl XXXIX ring!"

And so Chuck did join the club. Actually, he started it because Kraft was just being idiomatic in his response, but Chuck Norris doesn't F around with cliched turns of phrase. It's called Victims of Vladimir Putin's Kleptomania, and its emblem is this action figure of Putin riding a bear. Chuck Norris' bear. Which he still hasn't gotten back.

If you too would like to join the Victims of Vladimir Putin's Kleptomania Club, you can purchase the hand-painted resin statue to show your solidarity. Also, a portion of the funds from all Putin Riding a Bear action figures sold will go toward Chuck Norris' purchase of a plane ticket to Russia.

Just when you thought Chuck Norris couldn't get any cooler. Enter double machine gun Chuck Norris. Set this guy on your desk as a loyal companion, or by your front door as a crap in pants inducing bodyguard or a nice...

Subpar Parks: America's Most Extraordinary National Parks and Their Least Impressed Visitors is a tour guide through our country's finest specimens of Mother Nature. It is also a comedic compendium of reviews from people...