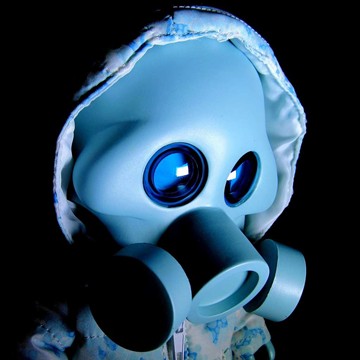 $75
from Project Squadt »
Check It Out

These little guys remind me of the characters in the movie 9. This collaboration is pretty cool and comes with a back story and a rabid internet fan base. Each "squadt" can stand alone, or form a part of a large collection.

New squadts are released intermittently, and range in price from $65-$85 and are usually produced in runs of 200. They sell very quickly after release, so claim yours quick!

Earth. All that remains is a shell of what the humans once called home. They are all gone now. Wiped out by a violent plague of some sort. The cause? Who fucking knows...that's not the point of this story. The point is how the hell the Squadts came to call our planet home. I will tell you. The powers that be, on the Squadts mother planet, thought it would be a good idea to purge their prisons and cleanse their lands of the dregs of society.

They loaded them up by the thousands, into a massive, interstellar, incarceration transporter (a huge fucking prison ship). Earth would be the final destination. It would now serve as a prison planet for the unruly Squadt masses. They would be left to their own devices, but monitored closely by the powerful Squadt overseers back home. A violent social experiment of the grandest scale...but of course shit went wrong.

Upon entering the earths atmosphere the massive prison ship had a major entry sequence malfunction. The landing was successful, but not without extensive casualties and complete decimation of the home planet communication and monitoring systems.

The surviving Squadts took right to their new home, adopting leftover human technology as if it was their own. And Because of their inherent violent and deviant nature, they instinctively divided into opposing gangs. Many battles would be fought. This is the story of the Squadts.

I doubt it's as easy as opening an umbrella to install, but this umbrella-style car sunshade sure looks dandy in use. Not to mention space-saving when in not-use, since it does mimic its namesake's collapsed size and...

A water bottle and mister in one?! Oh, too cool. I mean, O2COOL! Ha! That was deliberate, right? Good one, dads who run the O2COOL brand. I hope the quality of your Mist 'N Sip Misting Water Bottles can live up to the...

Thanks to Takara Tomy's Transformers x Canon EOS R5 Camera mashup, you can now use Optimus Prime to shoot people without consequence. They will probably even thank you for aiming the Autobot leader their way, though they...