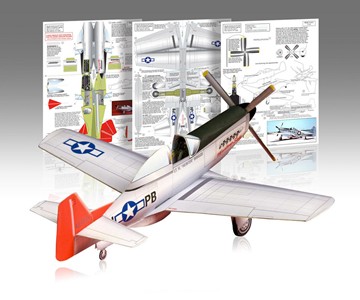 Huntly began making paper airplanes as a wee boy in the 1930s, and went on to build the real thing for Lockheed Aircraft Co. during WWII. After the war he flew light aircraft and worked in advertising for the aerospace industry for the next 33 years. The point is: Huntly liked him some airplanes. And he knew them well. With the advent of computer graphics he started building models from print-and-fold sheets of letter-size paper. Today, Huntly's Paper Warplanes passes his designs along to you in their series of DIY kits for building intricate and flyable 3D biplanes.

Warplane kits, all designed in California and made in America, include the construction sheets and assembly instructions you'll need to craft paper versions of over a dozen British, French, and US planes ranging from a Nieuport 17 and Boeing F4B-4 to a P-51 Mustang and Sopwith F-1 Camel (just like the one Snoopy imagines he flies). Assembly difficulty ranges from Beginner (e.g., Nieuport 17) to Advanced (e.g., P-51 Mustang).

Huntly's Paper Warplanes sell individually, or in Beginner, Intermediate, and Advanced packs. You can also bundle the entire collection for purchase at a reduced rate.