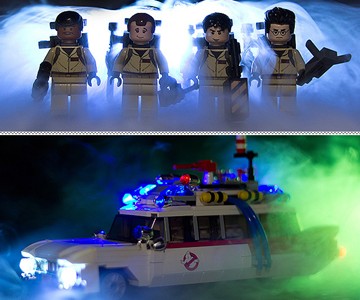 Can you believe that June 7th, 2014 will mark the 30th anniversary of the original Ghostbusters movie? Heady stuff. I feel sorry for myself that I was alive on that release date. But not as sorry as I feel for those of you who were 10 when you first saw Peter Venkman, Winston Zeddemore, Ray Stantz, and Egon Spengler in action, because even though Ghostbusters will be turning 30 next year, you'll be turning 40.

In honor of the Who you gonna call? (and, as consolation, tell yourself your) milestone, Brent Waller has built a LEGO Ghostbusters set featuring the team of 4, the Ecto-1, and beloved ghost Slimer. Submitted in concept and prototype to LEGO CUUSOO, his design sailed through the Support stage, garnering 10,000 nods from LEGO and GB fans, and now awaits official LEGO review. If successful on that end, I'd expect to see the guys and their ride debut to the public next spring. Probably in tandem with a re-release of Ghostbusters. Remastered. In 3D. With a digitally inserted cameo from 2014 Bill Murray. As a zombie.

You just spent nine...hundred hours putting that master-level LEGO set together, so Wicked Brick figures one of their display cases might be in order to protect and show it off...