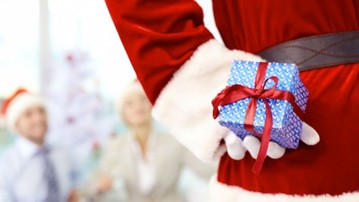 I'm rounding up the best Secret Santa gifts for $20 or less in a separate pen than the best white elephant gifts for $20 or less because these gift exchanges and 2 different beasts. And not just because one is an obese man who eats like a Hoover vacuum, and the other a majestic 6-ton animal that stars in my favorite YouTube videos.

While white elephant gift exchanges carry a gag / novelty item vibe, Secret Santa gifts are typically more thoughtful. At their best, they're a simple way to charm and delight your recipient. Make their day. Create, at the end of it all, the perfect opening to reveal you've been in love with them for the past 3 years.

Or maybe just enjoy their reaction to your gift, but keep your Santa identity secret. No need to make things awkward or spend the holidays nursing a stiff glass of rejection.

I've set the spending bar for these Secret Santa gifts at $20 or less, but also tried to include several that are much cheaper, since some exchanges require the purchase of multiple gifts over a period of time. I've also tried to select nice and/or handy gifts, gifts a Secret Santa recipient would legit like to receive. Or at least legit be able to regift to someone else later.

Here are my picks for the best Secret Santa gifts for $20 or less.

They're sushi socks going on anyway. Probably more like hot rotting death socks coming off. Mmmm, take a whiff of that, Cornelius. All the wasabi and pickled ginger in the world isn't going to cover up the scent of me and my fuchsia slices of tuna after a day of paintball in the sticky Houston heat.

Milkmen Design created the Saucemoto dip clip for near-universal compatibility with both vehicle vents and fast food condiment containers. Install one for yourself as driver, or clip them on in the passenger seats, front or back, to "encourage" the kids and your friend Cornelius not to make a sloppy sauce mess all over your upholstery and console.

Fresh corn season will be back. Someday. I swear. And when it's here, you're going to be grateful for all the fresh corn salads whomever you give this Cob Corn Stripper to brings in for you in thanks.

Note: The Chef'n Cob Corn Stripper is not to be confused with a lady in a cornfield on a Hitch 'Er Up Stripper Pole.

Sweet, now instead of asking my wife to carry my multi-tool in her purse, I can act like it's a fashion statement and have her carry it in her hair. The Clippa, like most women, is an accessory of many moods and dispositions. On the surface it's a snap-closure clip that holds a chunk of hair in place. But spin it around, open it up, and set it on the table and the Clippa transforms into: 3 different screw drivers; a wrench; a trolley coin; a ruler; a cutter; a lemon hacker; and a match stand. The perfect gift for urban survivalists of the female persuasion, as well as dudes comfortable enough in their masculinity to wear a ladies' barrette.

No fire or dagger tail, but this dragon's got teeth that will bind your paper together forever! Muahahaha! He'll also staple your finger if you're not careful. Speaking of which, in junior high my friend Cornelius used to offer to staple his arm for a dollar. He made enough to buy himself a Super NES. A gaming console's worth of arm staples!

I mean, if it's that kind of Secret Santa gift exchange....

Shine and its 24K Gold rolling papers add a new action to the ever-growing list of Things You Can Do with Gold. Currently populated by: 1) Eat it; 2) Shit it; and 3) Buy expensive things with it. Stoners and recreational tokers alike will rejoice to lay their lungs upon number 4) Smoke it.

The Happy Half Pint Glass is the perfect gift for the beer lover...the beer lover who maybe loves beer a little too much. Who maybe needs to cut back a little. Say, by half.

Part optical illusion, part gimmicky "redesign" of your favorite brew-bearing vessel, the Happy Half Pint Glass holds exactly 8.4 ounces of beer. So when topped off your pint of Guinness will always be half full. Or, more likely, half empty if you're the one who has to drink from the Half Pint while everyone else gets a real glass.

Balance Wu Design wanted to design a deck of cards "based on a simple concept of pursuing coolness." So they made them black. Because it worked for ninjas. And Johnny Cash. And bottled water. The black-on-black deck contains extra stylized high cards with futuristic twists: warrior Kings and Jacks, androgynous-looking Queens, and a set of skeletal Jokers. Happy pitch-black poker nights.

Now this is a special snowflake. Though originally designed for snowboarders, creators of the HexFlex found that carrying the pocket multi-tool around on their keychains drew the admiration of those who might not be into snow sports, but were into adorable pocket multi-tools. Especially during Secret Santa season.

I like how Hanayama Puzzles says its tiny new CAKE Cast Metal Puzzle is recommended for ages 12 to 105 years, but "A few bright children between 8 to 11 years" might also be able to solve it. In other words, parents out there who think your kids are the smartest and best: Game. On.

The HyperWhistle takes its World's Loudest Whistle title not from Guinness, but from a mustachioed dude with a sound meter doing a review on YouTube. In the video, he hits a "personal best" 143 decibels with the HyperWhistle, and while I don't know if there are louder lung-powered noisemakers out there, I do know that 143 decibels is louder than a police siren, a jet engine, and fireworks.

In addition to its peak output, the HyperWhistle says it has an audible range of over 2 miles. That's great news for people lost in the woods or broken down on a boat, but terrible news for those within a 2 mile radius of the office prankster who received a HyperWhistle from his Secret Santa.

Now here's a concrete example of why I like desktop toys. These concrete LEGO minifigs from Elemental Design Store could make some nifty Secret Santa gifts for men ranging anywhere from LEGO fanatics to CEOs.

Lodge's mini cast iron skillet may be just a baby, but this 3-1/2" pre-seasoned little precious is still burly enough to sear, saute, simmer, braise, bake, roast, and fry with the big boys. Hash and eggs for 1? Personal pan gooey fudge brownies topped with melting vanilla ice cream for a dinner party? A trough-style feast for your LEGO minifigs? The Lodge mini skillet has it covered.

The dad joke's on Dad this Father's Day with these 17 silly & funny Father's Day gifts Dad will love. No, I take that back. No joke, just a gag...gift...or two. Some of my picks are cheesy and corny like the man himself...

I say these 18 gifts under $50 will satisfy everyone on your list because I've tried to include gifts for all ages and types of people. Some of these products are even individually appealing to the kiddos and the grandparentos...